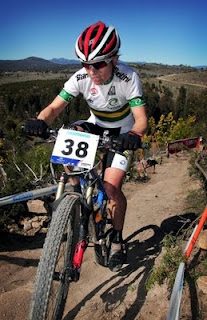 So given the year I have had, exactly how did I end up in the team for Worlds? A big thanks to coach Neil Ross for taking my World Cup 2008 ride at Stromlo into consideration. I had a week to recover from the epic, fly to Canberra, do a time trial at a reasonable pace and maybe stay for the big event.

I had no idea what my form would be like as I had barely started training again but it was worth a chance. Arriving in Canberra on Friday it was as cold as I remembered it. Quite a shock after the 35 degree Brissy days. Ah, the AIS food hall – what a welcome sight, like an old friend. Most of the team had already been there for 2 weeks in the altitude house. I’m interested in the training benefits of altitude but it didn’t sound that fun with all the gasping for air and sharing of a bathroom. Kind of glad I was in the ‘control’ group on that one.

Saturday was our turn to play guinea pigs as we were poked, prodded and needled by the physiology department who are always gathering more data on athletes to improve our knowledge of training effects. We did a VO2 test or RAMP test where you start on an ergo at an easy resistance, which is increased every 3 mins until you can’t maintain 90 cadence and the test is over. You also have a mask over your face and a tube in your mouth to record your O2 uptake, and a nose peg to make sure you only breathe through your mouth. Every 3 mins some one pricks your finger (or ear) and takes a blood sample that is analysed for lactate levels. Sounds great doesn’t it?? In the evenings there were information sessions about training, altitude, diet and other interesting tips.

Sunday was the time trial day – the day I would either fly home or go into camp with the team. I’d been given the cut off times and as long as I climbed within them I was good to go. After 3 laps I had my answer – I was in! That afternoon we moved all our gear to apartments in Kingston which would be the team base for all the Aussie riders (including downhill, 4x and trials). I roomed with Kath O’shea and Row Fry who had been competing in the international world cups this year. We were close to an IGA and a coffee shop which was all we really needed for the rest of the week.

Each night we had a team meeting and were given results of the previous day and a training session for the following day. The issuing of the Australian uniforms was pretty special – that’s when it became real and you actually felt part of a team. It was great sharing in the performances of other team mates as the races were spread out over the week. It was a bit more difficult staying focussed when others were finished their races and hitting the town though! The team had a big boost on Friday night when Australia grabbed both the mens and womens 4-cross world titles – so proud of Jared and Caroline!

My race was on Saturday 5th September. I rode as well as I could, considering my short preparation, and finished 40th, about middle of the Aussies. The course was great and they had made a few changes since the National titles there. It was shorter so we ended up doing 5 laps and there were more fun sections with jumps and berms – brilliant. I only had one crash but unfortunately it was in the section where all the television cameras were and was replayed on huge screens all over the course – me dropping over a rock, straight over the bars and into some soft bushes, all in high definition!

My flatmate, sponsor and awesome friend, Jo, flew down to watch me race and we were out for a big night that night. After some superb Indian food most of the XC team kicked on at the local bar and danced the night away with varied success until my legs finally screamed for me to stop. Post-race dancing is always a challenge!

So that’s how it all happened – a kind of last-minute, half-arsed, against-the-odds race with the world’s best, representing my country. Had a ball and gearing up for next year. A big thanks to Jo of eDiscovery Tools, Rob from Sram, Timmy and the boys from For The Riders bike shop, the physios at QSMC and Felt bikes.
Posted by Jodie Willett at 4:22 AM No comments: