Well there was no rest for the wicked and after a week back at home getting my bearings I packed the car and headed up to Hidden Vale on Saturday morning for the pre-Flight Centre Epic festivities. The event, which began with the classic 100k-ish race became so popular it is now spread over 2 days with a 20km, 50km and kids events on Saturday and the half- and full-epic on Sunday.

I was a bit hesitant about racing on the Saturday, knowing I would need all my powder dry to bring it home in the 100k, but I was also looking forward to riding the Hidden Vale single track. I’d forgotten how sharp and rocky it is out there but it is incredible how much work has been put into the trails and I had a super time. Its much more fun riding it without having punched out 100ks before-hand. Taking the win I refueled for the next day and hung around with the team until we headed to our accommodation in Toowoomba.

In stark contrast to the 38 degree conditions of the 2009 Epic, I was struggling to ‘warm up’ on the crisp 3 degree morning of the 2010 edition. Initially following team mate AJs routine of riding up and down a hill, the cold windy descent was killing me. The rest of my warm up was spent standing as still as possible in the sun, waiting for the sensation to return to my fingers.

The race start was quite fast as groups formed on the road sections and everyone settled in. My main competitor, Naomi Hansen, rode beside me until the Ma Ma Creek singletrack and I did not see her again until the end of the race. Mercifully we had dry conditions this year which made the course extremely fast, and coupled with the cooler weather the race record was definitely under threat.

Arriving at half-way quite quickly I received another bidon and camel-back from feeder Aaron and continued on feeling fairly comfortable. I was looking around for groups to ride with on the long, windy road sections but unfortunately I spent most of the race alone. The legs were a bit flat after the previous months racing but I kept a bit in reserve for a personal objective – to ride the steep Laidley Gap section of the course. In my first mountain-bike race (2006 half epic) I saw that hill and thought “that’s impossible to ride…I will never do it”. There’s a good deal of personal satisfaction in being able to conquer it now and it always looks impressive!

Having the race lead it’s sometimes difficult to stay motivated, knowing how hard to ride without having someone to chase. Doing some calculations at the third checkpoint I thought if I could go under 5 hours for the race that would be a good benchmark so I pushed on for the final quarter of the race. Riding the single-track at the end was far less smooth that the previous days effort but I made it across the line in 4 hours 55 mins, taking out the race.

Now came the best part – sitting on the lawn at Spicers Hidden Vale, eating burgers, watching the sun set and listening to other participants trade stories of their days adventure. Its such a great atmosphere and really brings home to me why I love mountain-biking so much.
Thanks to Chungy from Advance Traders for the rockstar treatment, and as usual to all our sponsors for the support: Merida, Flight Centre, Shotz, Schwalbe, Lazer, Adidas, SRAM, Nightrider, Jet Black.
Posted by Jodie Willett at 2:02 PM 1 comment: 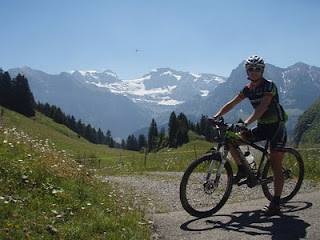 How to condense a month of travel into one blog post? Europe was ‘big’. While the concept sounds exotic the reality of dragging a bike around Europe from race course to race course is not without its challenges and can be quite fatiguing.

Flying into Geneva it was great to be greeted by a familiar face in my friend Vaughan. He and his wife had recently moved to Gryon in Switzerland, a beautiful little ski village in the Alps. It certainly allowed me to ease into my travel, being chauffeured around, meals cooked and generally being well-taken-care-of. With the race venue at Champery only 30 minutes drive away it was also very convenient – a point to remember when the World XC championships are hosted there next year.

They are really spoiled for choice with riding – mountains in Gryon, patches of challenging single track, or roll down the hill for a flat ride around lake Geneva and into France. The Champery course was one of the most technical I have every ridden…and that was before it rained for two days! It was interesting seeing the top riders choosing the run some of the lines as it was safer and sometimes much faster in the wet.

Unfortunately the morning of the race I woke up with another terrible virus, unable to be more than a minute away from the bathroom. Through some careful maneuvering I managed to get to the course and decided to start the race out of principle. I assure my host that I would do one lap and if I felt well enough would do a second and then pull out. As usual I had to go one better and managed a third before I almost passed out on the track a couple of times and was lapped by the leaders. The next 24 hours were spent under a doona, shivering, sweating and with a pounding headache and the effects of the virus were still being felt a few days later when I landed in Italy.

Val di sol is a stunning little town outside Trento in North West Italy. It is somewhere I could live very easily with narrow country roads, lush forests and that small village feel where no one seems in a rush. Sharing accommodation with four other riders from Australia, it was nice to be able to converse in English as there was very little spoken around us. We had one day of rain but the track was nice and dry by race day and we had some beautiful warm weather otherwise. Not as technical as the Swiss track, the course was still difficult due to the steep, repetitive climbing – definitely a granny-ring affair!

I had learned some lessons at Champery with regard to starting a race with 120 other riders and managed to get a good position after the start lap. Going as hard as I could on the climbs my aim was to be able to finish the race without getting lapped or pulled out, which is not as easy as it sounds. It was a relief to hear the bell on the final lap after the disappointment of the previous race and I finished 79th. An odd highlight was having a tussle with Chengyuan Ren, a former Chinese national champ, Olympic representative and world cup winner. I was in good company!

Another two 8-hour travel days later I arrived in Ottweiler, Germany. The race venue was in Saint Wendell, a town in the rolling countryside about 10 km away. Due to a severe lack of organization with regard to the National team our accommodation and technical assistance were only organized a week before and a big thanks to Vaughan for volunteering for the role of Australian team manager. Our accommodation was great, especially organized on such short notice and the lengths he, and assistant Jill, went to in order to ensure we had everything we needed and got our bottles and race feeds at the right times – it was extraordinary!

The days before the race were excruciating, having nothing to do except rest, stretch and eat. Trust me, its not as much fun as it sounds and makes for a very long day. There is only so much summer bi-athlon and grass-ski jumping you can watch on Eurosport. It was a relief to finally line up in the starting pen in the Australian colours and get the marathon underway. The course was a little…boring. There was a lot of riding through corn fields, grassy climbs and not as much single track as we would have in an Aussie marathon. The pace was hot though and we took off as if we were racing for 2 hours instead of 5. It was a pace I was sure I couldn’t sustain for the race so I dropped off the back and rode with a smaller group of about seven girls. In retrospect it would have been better to stay with the lead group as they were no more than 30 to 60 seconds ahead of us for most of the first half of the race. Lesson learned for next time!

It was more of a course for power riders and while I would pull away from the other girls on the hills, groups would soon catch me on the flats where the course was very open and windy. The second half of the race had much more climbing and I dropped the group I was riding with and managed to pick a handful of places as other riders suffered from the early pace. Finishing in 25th spot I achieved my goal of a top 30. Time-wise I was reasonably happy, being 11% behind the winner, just outside my goal of 10%. My team mate Adrian Jackson had a super ride finishing on 25 minutes (9%) behind the leader, a fact not reflected in his placing but still an awesome effort.

Suffering a bit of culture-fatigue and missing my daughter after being away for a month I boarded the plane for home, never more grateful to be confined to a tin can for 25 hours. While everything did not go perfectly (it never does!) I learned so much in terms of race-craft, organization and resources available when travelling, it was an invaluable experience and I am keen to do it all again next year.
Posted by Jodie Willett at 6:59 PM 1 comment: