Fight your way back...24 hours at a time 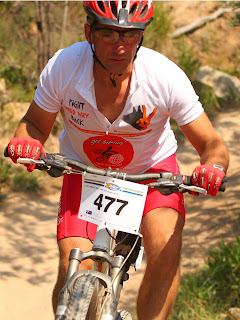 So why did I decide to line up at the 24 hour solo? I got asked that a lot during the hectic weekend that was the combined Scott24 and Solo 24 hour World Champs. Racing (I use that term loosely) a 24 hour event had been in the back of my mind for a while – one of those ‘must do before I die’ boxes to tick. There is also some conjecture in Cross country circles as to how tough the event really was. So you ride around in circles for a whole day really slowly, versus pinning it up every climb until your lungs explode for a couple of hours. In the beginning, I just wanted to know what it felt like.

On a racing expedition to Perth for the Dwellingup 100 I spent a little more time than is healthy with current World Solo Champion Jason English. His relaxed manner and apparently lack of mental deficit convinced me that normal people DO race these things. The off-hand suggestions that I should give it a crack worked their way into my subconscious like those nasal-delivery-technology ads, and I wondered what it would be like to ‘last longer’.

The tipping point would come from a man not many of you may have heard of though. His name is Cris Harris. Cris lives on the Sunshine Coast with his partner, Rachel, and daughter, Meg. He’s never stood on a World Champs podium or pulled on a green and gold jersey – but he is a star. I read his story on the Black Dog Institute website, detailing his fight with depression and campaign to raise money and awareness by completing the 24 hour solo. It struck a chord with me as I, like Cris, battle daily with the ‘black dog’ of depressive illness. Cris’ website, called ‘Fight your way back’ was such an accurate description of living with depression. (http://www.fightyourwayback.wordpress.com/ )

“Rachel and I were discussing a name for the project and when we came up with ‘Fight Your Way’ back, we just knew it was the right one”, Cris told me.

It encompasses my, and obviously Cris’, attitude that recovery from depression is not a passive process. In the age of anti-depressant drugs, those who don’t fully understand the illness and its treatment may think that taking a pill, sitting back and letting it work its magic is all that’s required. The reality is quite different with medication only working for some, and in a very subtle way which just takes the edge off what could otherwise be a steep descent. The initial stages of treatment may also see a worsening of the condition as people battle the side-effects such as anxiety, dizziness, sleeplessness, involuntary yawning fits, while not feeling relieved of their mood disorder at all.

Exercise has been identified as one of the most effective treatments for depression (a fact sheet can be found at www.blackdoginstitute.org.au/docs/ExerciseandDepression.pdf) and is definitely one of the drivers behind my resumption of training after deviating down a different path. In high school I was a training junkie and represented the region in Cross Country running and soccer. After moving away from home for university the underlying, undiagnosed depression I had suffered for 3 years worsened. I ceased exercise, took up smoking, excessive drinking and lost the person I had been. It was only when I fell pregnant and had my daughter that I was motivated to regain my health and take control of my illness instead of it controlling me.

Ironically, when a bout of severe depression hits it can make people lose interest in exercise, which is one of the effects identified by Cris during his campaign. He writes on the FYWB website:

“When my depression started two and a half years ago I was moderately fit. The depression took away my motivation and enjoyment from exercising and so that ground to a halt. About 18 months later when I was at my worst, it was a struggle for me to even walk up one flight of stairs. That brought me to tears, as I had been extremely fit at other times in my life, and was the turning point for me.”

Clearly not a man to do things by halves Cris embarked on the arduous exercise of training and planning for the Solo 24 Hour World Championships. The journey has been full or ups and downs he confessed to me in Canberra, but when I stopped by the pits on Sunday morning Cris was still going, with a huge grin on his dial. Sure, he was so delirious he didn’t recognise me at the time, but I’m betting he wasn’t the only one that day.

My race ended early, with me vetting myself out after voiding my rib warranty for the second time this year. Despite that I can honestly say I enjoyed every minute of it and it won’t be the last one I line up for. I can’t say I’ve settled the debate on whether XC or 24 hour is the toughest, but I can now compare the two from a position of experience as one who readily courts pain in all its forms.

So the next time you pass someone on the trail, pause for a moment and wonder about their motivation for getting out there. We throw around lines such as “Riding is life” but for some it might be less of a metaphor. If a riding buddy starts skipping the weekly session or seems a bit less enthusiastic than usual take the initiative to ask “are you ok?” (see http://www.ruokday.com.au/ ). It’s also a huge rap for the MTB scene as a supportive community which entices people to be active, no matter what their background or goals.
Posted by Jodie Willett at 4:57 PM 5 comments: