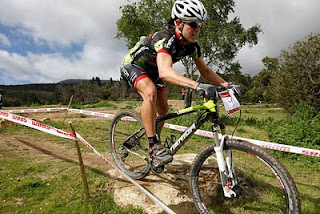 Hobart is the coldest, windiest place I have raced to date and it escapes me how anyone could live here, let alone train here. Its December for Pete’s sake and we got snowed on at the top of Mount Wellington! After taking in a few of the sights, it was down to the serious racing.
Although it had been raining the course is mostly hardpack – no need for mud tyres. Running a Schwalbe Rocket Ron on the front and a Racing Ralph on the back, my Merida O.nine was set up for speed. The descents were tight, rough and fast so it was up to the rider to have the confidence to just let the bike run. Climbing was split into two sections – the first being a long, dead fireroad drag and the second a twisty singletrack ascent with loads of switchbacks.
I wanted a faster start this race as we let the leaders go at You Yangs and the gaps opened up too much. At the top of the first climb I was in about 4th spot and we were all still together. Jenny King and Rowena Fry were doing battle upfront while Bec Henderson, Kath O’Shea and I kept swapping positions as we attacked each other.
On the third lap I lost O’Shea’s wheel in a rough section of trail where it was difficult to get out the saddle and respond with a sprint. Henderson then also came over the top and motored past O’Shea as well. The last two laps were spent chasing O’Shea just 20 seconds in front and holding off Anna Beck who was having the ride of her life.
Finishing 5th I was still happy with my ride. Sure my position was worse than last round be to top 5 finished just over two minutes adrift of Fry which is a great sign for women’s XC racing. It was definitely a battle all the way with the positions not decided until right on the finish line – awesome stuff!
Special mention goes to my Rockshox XX forks. These babies are 12 months old and I feel they are maturing like a fine wine. I’ve been getting more confidence in adjusting my bike settings and have been enjoying finding that sweet spot. If I told you what it was I’d have to kill you but it was just unbelievable how they were soaking up the hits out there.
Sponsors…where would I be without you? Merida, Flight Centre, SRAM, For The Riders, Shotz, Schwalbe, Adidas, Jet Black, Lazer…group hug guys! Merry Christmas!
Posted by Jodie Willett at 11:20 AM 1 comment:

After having a bit of time away from racing I was pretty excited to be jetting off to one of my favourite tracks at the You Yangs, just outside Geelong. All the locals swear that it never rains there, but every time I turn up it buckets down and this year was no exception. Cutting laps of the track on Thursday and Friday was less like work and more like just having fun on the bike. I put a 2.25 Nobby Nic on the front because…well I thought it would be super-fun on the descents, and I was right! There was not a lot of climbing but it was very technical so you had to ride at 95 percent so you had a bit extra in reserve to get up onto a rock ledge or through a garden of boulders.
The Saturday of the race it was all blue skies and 20 degrees – fantastic conditions. With a long open starting loop it was fast from the gun but at least there was time to sort ourselves out before we hit the singletrack. Two girls went out fast and were not seen again. It was an advantage to start fast as it was difficult to pass on the singletrack. National champ Rowena Fry was sitting in front of our group and I was pacing off her. By the second lap though I was feeling pretty strong and pulled in front of her, only to have my spare kit detach itself from my bike and almost get tangled in my spokes. Regrouping I settled in again behind Row and overtook her in the feedzone. On the first technical climb though I zigged instead of zagged and lost traction to end up behind Row again. Finally I passed and made it stick, riding strong on the fourth and final lap. Enjoying the fast and technical descent I finished third and very satisfied.
A week later and I’m back in Victoria for the Jeep 24 hour teams race. On the way down to Lorne from Melbourne it was too much of a temptation and Boothy and I pulled in for a muddy but super two hours at the You Yangs. Kicking back at the motel contemplating another weekend of smashing it up on the trails we both acknowledged how lucky we are to be able to do this. Living the dream!
Posted by Jodie Willett at 11:17 AM No comments: