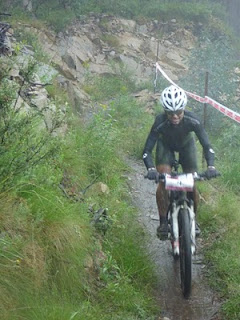 Sweltering away in a proper Brisbane summer (finally) I felt very odd packing an all-weather jacket and arm warmers for the third round of the national series at Mt Buller. After consulting the trusty BOM website though it seemed I had to be prepared for 30 degrees and fine, 15 degrees and raining then 6 degrees and clearing. Gotta love Victoria.
Getting in some practice on the course I found it interesting, with some flowy single-track, tough open climbing and plenty of places for passing. The final descent was a treat, although after heavy rain on Friday it was expected to deteriorate on race-day. As the temperatures dropped a Northern girl like me really appreciated the new custom Merida jacket from Champion Systems. Complete with rain and windstopping-goodness it really saved my weekend. It has definitely earned a place in my European Adventure packing list.
I ran a Schwalbe Rocket Ron on the front and a Racing Ralph on the rear because…well honestly, that’s what was on my bike and I was too busy to change it. Also, my motto is “if it ain’t broke, don’t fix it”. It turned out to be the perfect combo with a slightly more aggressive tread on the front to hook into the ample amounts of mud. I’m still running 3x9 Sram X0 drivetrain and am hanging on to my granny ring like a security blanket. It got a workout today but I’m looking forward to getting on the XX system on my Merida 96 at home.
As start time rolled around I reluctantly relinquished my jacket, but raced in arm warmers to keep the shivers at bay. After the usual insanity of the first lap I settled into 9th position, trying to get a rhythm going while appreciating the atrocious weather as great prep for European racing. The boggy, soaked course reminded me of Champery although at 15 degrees it was still a fair bit warmer than that slice of Switzerland.
By the second lap I realized I was on a bit of a creeper. Not unexpected as I’d just done a big block of base with zero intensity, but still disappointing as my heart rate hovered well below threshold. While everyone else was wishing our 5 laps would be shortened due to poor conditions, I secretly hoped we’d go longer so my endurance could kick it. I soaked up the technical experience as we don’t get to ride mud in Queensland due to the damage it causes to the public trails. Getting a bit ‘unusual’ in a few slippery sections would have been fine if it hadn’t been the spots where the national coach was standing…every lap!
There were some challenges to manage throughout the race as I was frequently blinded by grit flicking up into my eyes. My technique was to keep blinking really fast to try and wash it away. It would have been useless rubbing my eyes as my filthy gloves would have just worsened the situation. I had also unwisely invested in some cheap grips which I spent most of the time hauling them back as they attempted to slip off the end of my bars. The fixing properties of hairspray are neutralized with rain it seems – who would have thought?
On the final lap I was warm even though it was pelting down and managed to pick up a couple of spots to move into 7th. I was having a great tussle with my team mate Terri Rhodes, who was on a super ride and showing off the bike skills she’s learned on the world cup circuit in 2010. It came down to the last descent where she got the better of me and left me to sprint it out with Peta Mullens (Honda Dream Team) to cement my 7th place.
Riding back to the apartment in Buller village I jumped into the hottest shower, still resplendent in my now not-so-green kit and tried to wash away the evidence of a hard slog. The priority now is to recover so I can start the sharpening up before National Championships in Adelaide in 3 weeks. So I’m kicking back in bed, compression tights on, munching on a gift from Shotz proprietor Darryl ‘the genie’ Griffiths…I wished for gluten-free Protein Recovery bars, and they magically appeared on my doorstep. Awesome.
Posted by Jodie Willett at 11:43 AM No comments: