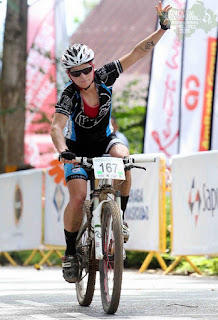 I’ve been wanting to visit Malaysia for about 12 years so the LIMBC was a great excuse. Five days of racing on a tropical island, hotel accommodation, all transport and meals included – I could see nothing bad in this proposal. Race-wise I didn’t have too many expectations – a top 5 finish on a stage or two in a field which included world number 8 Natalie Schnietter and Australian XCO champ Kath O’Shea.

My first time on Singapore Airlines proved to be a seamless experience – frequent flier here I come. Arriving Sunday night there were shuttle buses there to greet the riders and escort them to the Bayview Hotel in Kuah Town. The whole week continued like this with regular transport to venues for riders and supporters, plenty of post-race refreshments and three delicious meals per day at the hotel. Some people were a bit tired of rice and curry at the end of the week, but this tends to be my staple diet so it was ‘situation normal’.

Maybe I missed the communiqué on health but I didn’t get any pre-trip jabs, I ate the food and drank the water from the tap and stayed healthy, although quite a few riders were hit with stomach problems in the first couple of days. The main challenge was hydration due to the temps in the low 30s and 1000% humidity. Losing litres of sweat during each stage it was difficult to keep forcing the fluids in. I cramped badly in the first stage and doubled up on the Shotz electrolyte tabs for the rest of the week and didn’t have a problem.

Stage 1 & 2 were also stand-alone UCI XCM and XCO events respectively. The initial stage was a tour of the island, cutting through the jungle on mainly double track with some technical sections, short stretches of tarmac and some memorable muddy hiking. Almost every afternoon was punctuated by a storm which necessitated bike cleaning daily. The trails held up well though and Racing Ralphs were fine without resorting to anything more aggressive.

The XCO track was my favourite stage and also best result with a second placing. An initial climb littered with slippery rockes and roots broke the field up early. Midway through the course it was all downhill on some tight single track through a rubber tree plantation. The farmers agreed to remove the liquid rubber collection buckets to avoid the riders being coated in a sticky mess. The clay descents proved intimidating for some as the course dropped down the terraced hillside. My Santa Cruz Blur was perfect for stages 1 to 3 which more than made up for being slightly outgunned by the 29 inch hardtails in the remaining stages. I was surprised at the quality of the single trail which left you smiling despite the sauna-like conditions.

Stage 3 had initially been slated as a 6 hour, but due to adverse trail conditions (the terms muddy and sewerage were used) it was cut to another XCO race, but more like a long duration short-track with minimal climbing and stretches of flat grass. I was prepared to hate this course but it was so much fun as well as fast and furious. Again the quality trails saved what could have otherwise been a boring stage.

Sitting in third place I had two days left to survive with a head cold coming on. The legs were feeling pretty empty and I just tried not to bleed too much time on the 14km hill climb up Gunyung Raya. Falling off the back of the bunch several times on the way to the foot of the climb I wasn’t confident of reaching the top! Focussing on finding my own rhythm for the 50 minute climb and fighting the urge to climb in one of the support vehicles I only lost a couple of minutes to the 4th placed Italian Benzoni. The descent was uber-fun though and I got to chat to Chris Froome of Sky and Adam Blythe of Omega-Pharma who were making guest appearances for the final two stages. Looking a little uncomfortable on the event-issue MTBs with questionable geometry and positive rise stems, they still seemed to be enjoying the break from skinny tyre Euro adventures.

The final crit of 30 mins plus 3 laps was held in possibly the warmest conditions of the week. Half-tarmac, half dead, corrugated grassy slog the lead bunch stayed together until the last two laps when a few riders, myself included, dropped wheels as the pace turned up. Finishing 30 secs adrift, 3rd place on GC was assured and it was time for some R&R.

Exploring the island on scooters is a must with the open roads and courteous drivers making it quite safe. Even getting caught in the short intense storms is quite pleasant when temps rarely drop below 30C. The beach near the Sheraton resort on the north-west of the island was a highlight with the quintessential brochure setting of white sand, crystal clear water and mini-islands within swimming distance. Other options are jet ski hire, para-sailing, cocktails on the beach, massage…the list is extensive.

In only their second year the organizers, Human Voyage, have pulled together a super event and a truly international field in a spectacular setting. Definitely a great way to combine racing with a value for money holiday. Keen to return to this one next year!

A big thanks to Donna from PCS Coaching for all her work in getting me prepared for racing and also the boys at FTR for getting my equipment in tip-top shape.