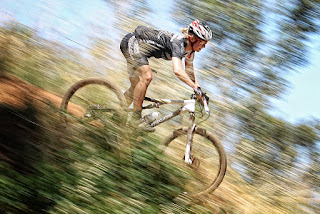 A bit of a funk set in after leaving Langkawi. On such a high after a big performance and a top event there were a few post-race blues. I lined up for Noosa crit simply because it is a big event and one of the few times we get to race in front of a crowd (no, a proper crowd, like more than 50 people). After getting worked over by the teams I finished in the bunch while Olympic road champ Nicole Cook won the sprint in the break.

I hopped back into regular training but soon started to feel a bit hollowed out. I rode Karingal 4 hour with team mate Kylie Maduna and we won convincingly, beating most of the guys too. Locked in a battle for pride with 4 cross world cup champ Jared Graves and Kylie’s boyfriend Shaun, I ended up working a lot harder than I wanted to. I’d like to say I learned some skills following Jared on the single-track but in truth he disappeared in a cloud of dust.

Travelling to Perth for the new All Mountain Cup I was still feeling a bit flat. Bad news for me since Jenni King brought her A game (as usual) and gave me a flogging all weekend. Its now common knowledge of how disgruntled I am with the new series format but I did enjoy the XCO track – appropriately brutal! Ironically my only crash was in practice on the least technical section when I clipped a rock with my pedal and punched a hole in my forearm, lost skin from my hip to my shoulder blade and mangled my seat. A just punishment for riding with my head in the clouds. It was hard to find anyone who wasn’t sporting Fixomul by Sunday afternoon including Olympian Sid Taberley. I was happy to come away with a second place for the weekend and an oath to brush up on my cornering skills before the next race.

Despite my scathing review of the event the basics were there with interesting trails and an enthusiastic club. The XCE track would have made a fantastic short track race with table tops, doubles and rock drops. Likewise with the Super D – awesome track, we just didn’t get to ride it enough times and spent too much time in our kit, standing in the sun waiting to be told what the hell was going on! I think the point of having the extra events is not to elevate them to the same ranking as the XCO but to encourage people who don’t want to race the XCO to participate in the support events. Trying to grow the series by forcing the current pool of riders to enter ALL events is the wrong solution. The way forward is to bring in new blood and tap into the thing that makes events like the marathons and the 24 hour events such sell out successes.

Thanks to Perth MTB club, cycling legends Jo and Tim Bennett for putting me up, and sponsors ForTheRiders, Sram, Shotz, Adidas, NSDynamics, Schwalbe and PCS Coaching.