Its reminiscent of my running career when I was always pondering “is it a stress fracture…isn’t it…”. The type of injury that hurts, but not enough to stop what you’re doing. My running friends go through this a lot with the calf-niggle, the Achilles-niggle and the pain-in-my-butt-that-I-can’t-quite-describe. The injuries where training is possible but slightly less fun and done with a pall of doubt across your mind when you wonder if you’re actually doing more damage. They are also the ones where you would give your right arm for a definitive MRI result and diagnosis, but rarely get.

After a run-of-the-mill crash on the MTB a couple of weeks ago my hand felt a bit bruised but shaking it off as just that, I kept training and working. I went out on the usual Thursday morning ride with the crew this week and noticed my hand was getting sorer instead of better. It was even starting to hurt during my work doing massage which it had not before. Self diagnosing as a possible small fracture of the 5th metacarpal near the wrist I set about trying to organize the impossible – a doctor’s appointment for an X-ray referral 2 days before Christmas. Most of the MDs I know are already vacationing on islands or shacked up in their ski lodges waiting for the next fall of powder. And the doctors that aren’t – do I really want them assessing my riding injury? Ok, for all the hard working doctors sans-ski lodges, that was a joke, but the bottom line is I’m probably not going to find out before ‘ride week’ in Mount Beauty and I probably don’t really want to know anyway as it sounds very difficult to ride in a cast.

Being Christmas time – the time for excess – I imagine there are a lot of good intentions being thrown away as training is bumped for another Christmas party, shopping or eating. The less-committed let it become another excuse the lose weight or improve their fitness whereas most people I know are looking forward to making use of work holidays doing long rides and runs on quiet roads, quite possibly with a nagging pain here and there because they just can’t let an opportunity like this pass by. I can relate to that.

(Footnote: The fantastic staff at Cavendish Road clinic made room for me and just rang through the result – all clear, phew. Just a ‘day in the life of’.)
Posted by Jodie Willett at 1:16 AM No comments:

The week before Christmas tends to encourage reflection of the year just gone. What a ride! Wins at the QLD series, State champs, Dwellingup and Saipan being highlights. I’d rate my 3rd at Langkawi International MTB Challenge as my ‘ride of the year’ (actually probably ride of my career) and certainly the most fun I’ve had for a bit. Once I’ve finished pursuing my goals in XCO I’m definitely getting into more stage racing – its got travel, riding and socializing all wrapped up in one neat package.

So the big goal for this coming year, unsurprisingly, is Olympic selection. If you are really interested the selection policy is here http://www.cycling.org.au/default.asp?Page=8021&MenuID=High_Performance/20012/0. Trying to work out a viable way to jump through all the requisite hoops is a struggle at best. I’m trying to remember the last time I wasn’t drowning under a mound of debt – oh that’s right, BEFORE I discovered cycling. The help I’ve had over the last 5 years I am incredibly grateful for, and am very lucky to have had. Reducing the costs of competing has been the only way I’ve managed to stay in the sport and all I hoped for ( I certainly never expected to make a living out of it). While its scary as hell I’m ready for one last throw-down – one last year of living and racing beyond my means so I can look back and know that I gave myself every chance to do something extraordinary. No, I won’t retire from the sport, but doing races for fun and experience will feature more than chasing points or fulfilling selection criteria.

Coach Donna of PCS and I have been working on a slightly different approach to training, fine tuning after a few months of seeing what works for me and what doesn’t. I’m definitely doing less overall time on the bike than with previous coaches but at times have never been so smashed. What it lacks in volume the program sure makes up for in intensity. There are so many schools of thought when it comes to training and I look forward to delving in deeper now that I am coaching a bit myself. My tendency to do too much is apparent and something I need to get a grip on. Having to report on each session, how hard I felt it was, did I enjoy it, what did I think about while I was in the pain cave – these all make training conscious and purpose driven which I think is important.

The excitement of a countdown is also a new thing and also a way to stop the time sneaking away from me. This time in 10 weeks I will be in Adelaide racing the National Champs – 10 weeks to do everything I can to be standing on the top step of the podium. Strangely that is only the start of craziness which then rolls on to Rotorua, South Africa and Belgium. But that is all still a bit daunting for me to think about this weekend! I’ll be blogging more frequently about training which I hope some of you will find interesting and helpful. Its time for me to start planning another adventure – ride week in Mount Beauty. It will be my first time and am looking forward to some crazy climbs and new trails. Say ‘hi’ if you’re down there.
Posted by Jodie Willett at 8:24 PM No comments:

Hell of the Mariana's - Saipan

What did we do before Facebook? Seriously. I made a passing comment about needing inspiration which was spotted by fellow MTBer Les Heap and through a six-degrees-of-separation type phenomenon I had accepted an invite to race in Saipan despite not really knowing where it was. A friend told me that even Google didn’t know where it is because when he searched for it there was just a flag in the middle of the ocean just off Taiwan. I told him to zoom in…closer…closer…closer…there you go.

The journey went Cairns-Guam-Saipan and we were escorted to the Pacific Islands Club resort where our host Kieren Daly had previously been Manager for 10 years. The Hell of the Mariana’s 100km road race was started by Kieren and is now in its fifth year – the first year he has been hands-off since moving to the Gold Coast with his family. I am mystified how he managed to tear himself away from the resort as I was definitely ready to set up there permanently. The water park includes a body surfing wave machine which is great fun until you stack it and the current almost rips your bikini from your body – when the attendant told me board shorts were a good idea, I really should have listened. Water slides for the kids, the grown-up ones too, and the resort is absolute beach-front for snorkeling and kayaking. Humidity, temps in the low 30s – I’m getting used to this.

I wouldn’t normally bother with a course reconnaissance for a road race but Kieren highly recommended it due to some interesting ‘features’ of the race – namely the steep climbs and road surface. With pinches kicking up to 15% and a shell-composite road surface which comes with a ‘slippery when wet’ warning, it was starting to feel a lot more like mountain-biking. We did a practice run of the last couple of climbs including Suicide Cliff where the Japanese soldiers and civilians jumped to their deaths when cornered by US forces during WWII. The race is a tour of the island which conveniently starts and finishes at PIC resort which meant the 6.15am start was going to be a 50m roll from our accommodation. This turned out to be just in time for sunrise as its technically winter in Saipan despite the balmy conditions. 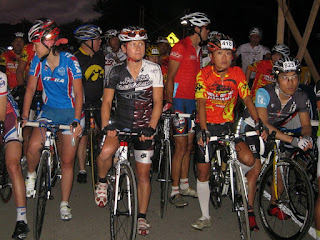 Rolling out, the day was going to belong to those who hydrated well, stayed upright on the slick roads and had a bit of luck in not getting flats as there is no official ‘spares’ vehicle. I was regretting bringing tubular wheels as there was no plan B but it was a case of ride what you brought. With 150 riders total the field broke up quickly on the first climb with the lead men’s group pulling away. I cobbled together a few stray guys to form a grupetto to help each other on the flats between the hills. Being conservative on the descents I could only gasp at how fast some of the local guys were taking the corners. I never came close to crashing but there was a bit of excitement on a cyclo-cross-like section where road works became dirt littered with shallow pot holes – cue: stray dog with a penchant for cycling shoes!

With the tough first 50km behind me I started to feel a bit more confident. The field was strung out in ones and twos so there was little chance of being caught by another female in a larger group. I had been working with Pete, a rider from Guam, in the middle section of the race as it helped to have at least one person to swap off with in the gusty conditions. As the last 25km was a dead flat drag back to the resort I was hoping to maintain the situation but unfortunately he was hit by the dreaded cramps just before the turnaround. He apologized profusely for his recalcitrant legs and dropped off to continue his suffering alone.

We were virtually promised a tailwind on the way home by Kieren and I was cursing him all the way as I time-trialled solo into a cross wind for the final haul. I kept looking back, praying for someone to catch me but with 15km to go I decided to just get on with it. Crossing the line for my first international win I even remembered to zip up my jersey – what a pro – although I resisted the temptation for the two arm salute lest I crash and knock myself out two metres from the finish line. Every rider falls straight into the healing hands of the team of Thai massage therapists who sort out the kinks from the last few hours. I nearly fell asleep and regretfully got up at the conclusion of treatment, only to have both my hamstrings cramp, much to the amusement of others still receiving their rub.

Finishing the day with official presentations at the buffet on the beach it was time to kick back and enjoy the rest of the weekend. Watching the sunset over the Pacific with a glass of red wine in the company of locals and visiting riders from as far away as Russia, it capped off what came close to the perfect day. Yep, I’m getting used to this.

Many thanks to Kieren Daly, the organizers of the Hell of the Mariana’s and PIC resort for your amazing hospitality. As always a shout out to my sponsors: For The Riders, Santa cruz, Shotz, Sram, Schwalbe, Adidas Eyewear and PCS Coaching. 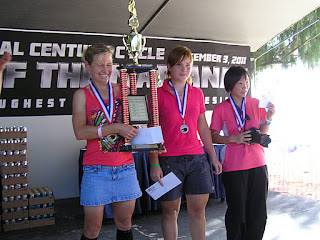