Waking up to 20cms of snow was the best sign I could think of that it was time to leave the Swiss Alps. I had loved my time there and it will always be remembered for its’ many kilometers of quiet training roads and strength-building climbs. I thought I had spent enough time doing downhill runs of impossibly steep and muddy ‘trails’ to have conquered my fear of the vertical. Then I arrived in Houffalize.

An exhausting 8 hour drive from Gryon (I wasn’t driving but it’s hard on navigators too) the town in the Belgian Ardennes was a sight for sore eyes. It was quintessential everything from the traditional stone houses, cobbles, verdant rolling hills and cozy beer cafes on many corners. I’ve given up taking photos of towns like this as my skills with a camera have no doubt been far surpassed by those before me so I acquired this one from the internet courtesy of chalet-houffalize.be. 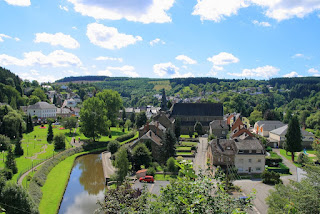 Houffalize is one of those places that seem to be stuck in time and you just want to hug it and tell it to never change. Yep, I am smitten! Situated between Bastogne and Liege these are also hallowed roads for road cycling and some of the infamous ‘hard man races’ are held close to here, renown for providing the riders with no place to hide. And so it is on the dirt too.

Television rarely does justice to mountain bike races. It just never conveys who truly steep and treacherous the landscape is. I predict the Houffalize course will make less than exciting viewing as it lacks the man made obstacles of Pietermaritzburg where the difficulty is obvious. What is does have is my official ‘steepest course I have ever ridden’ title. I think I had previously awarded this to the Czech race of 2011 but it has now lost its crown. Not content to be merely steep it also desired to be rainy, muddy and then it hailed just for good measure making for an interesting first practice session. Of the 4 very technical sections I rode two of them, hard a good hard look at the other two and decided to sleep on it.

I’ve developed a habit of spending a lot of time looking at sections that scare me. There is something to be gained through the vicarious experience or watching other riders choose their lines. Even repeatedly approaching the obstacle and stopping at the last minute I find helpful in memorizing exactly what it looks like and exactly where I want my bike to go. Then there will be one ‘practice run’ when I just keep rolling and suddenly I’ve ridden it. Well, if everything goes like I saw it in my head anyway. Sleeping on it just gives me a whole night to see myself acing the line.

It worked like a charm and Fridays’ practice session was a picture of smoothness and control, in stark contrast to the UCI registration process that saw half the elite field border on hypothermia after waiting in a line for 2 hours. Apparently being the governing body of cycling they are more concerned with the ‘big picture’ issues than streamlining their sign-on procedures.

As an atheist it’s quite hypocritical for me to pray but I was doing something close to it to ensure a dry race on Sunday. A quick open of the window on race morning confirmed the fact that it was bloody cold with ominous grey skies but luckily no rain. The roll to the start was excruciating and resulted in numb extremities and what I can only describe as an external ‘brain freeze’ experience. Undressing to race was almost unthinkable but in the end I peeled off the leg warmers and settled for arm warmers and a double-jersey arrangement.

The start loop was akin to a wall of dirt and I had anticipated that we would be off walking it once the first person unclipped. Bingo! But it was a bit of a relief considering what the next 90 minutes or so held for us. It was an course that would see a lot of riders ‘blowing up’ after starting too hard so I planned to stay out of trouble the first couple of laps and ride consistently for the remaining. After locking bars with someone on the start line in usual form I was dead last at the top of the first climb. Working my way through the back markers I was grinding up the ascents, working to keep the front wheel on the dirt, and then seemed to pass most girls at the top of the climbs as they slowed to recover while I put what power I had left into the pedals.

The only people colder than the racers were our long suffering pit crews, standing atop the plateau in a howling Belgian wind with the chill factor close to zero degrees. Belgian fans seem impervious to the weather though and lined the course with their cheers of “Allez!” and the smell of hot chips and cigars thick in the air. 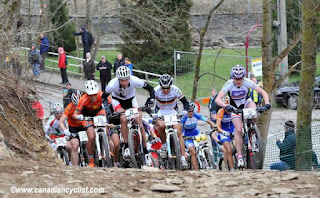 In the unofficial race to finish higher than your number plate I came up short with a 73rd placing after starting 70th. My form has been static since the National Championships which is a bit disappointing. Looking at the Australian results in general though it is a good sign that riders are finishing on the final lap which was not all that common a few years ago. This race was likely to be my last international World Cup and I am delighted to have seen it out on one of the iconic Euro XCO courses.

To all those who have been part of the journey, my sincerest thanks. A special mention to Donna Dall of PCS Coaching for her program and putting up with my emotional rollercoaster. Also, to the lads from For The Riders MTB shop who have supported me for 4 years both with equipment and making me ride stupidly gnarly trails early on Thursday mornings. I’m working on the next phase of my riding so thanks for reading and stay tuned!

Posted by Jodie Willett at 11:22 PM No comments:

One for the gear heads

Race week at last! I’m super excited to be at the pointy end of my training and racing block. It has been such a special experience having this opportunity to live and train in Europe so I can arrive in the best possible condition for the World Cup in Belgium. I’d like to thank everyone who made this possible especially my hosts Vaughan and Rose who opened their home to me in the Swiss Alps. It wouldn’t have been possible without you – Merci! 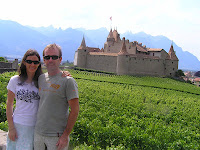 I’ve compiled a list of equipment I have also found indispensible in the Euro conditions so, as well as being a plug for some of my sponsors, I hope you can find it useful if you are thinking of making the trip or just searching for some better options for the local trails.
Sram XX 26-39 Chain set

Initially running a 28-42 I swapped to the smaller chain rings before I headed to NZ as I remembered how steep the World Cup courses were. Having the 26 is great for keeping the legs at a good cadence while climbing and the 39 means I can ride longer in the big ring when the course calls for it. XCO courses don’t call for a 42-11 combo so it’s no loss, but I’ve kept the bigger rings for when I’m racing marathons. 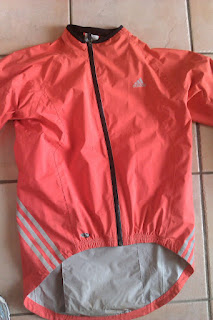 Surviving the cold is all about layers. Having a wind and waterproof jacket helps take out the ‘chill’ factor that makes cycling most uncomfortable in winter. Wearing arm warmers, a jersey and an undershirt beneath the jacket was enough to get me through 2 degree training sessions. The advantage with the jacket is when it gets warmer I just folded it up and put it in my back pocket. Very handy.

The extremities always take the brunt of the cold weather so even when the body is warm, the hands are likely to be cold due to reduced blood flow. A good pair of weather proof gloves literally saved my life – not being able to brake when you’re hands are frozen is sub optimal. They give a bit of a ‘michelin man’ feeling so not ideal for mountain biking, but for road sessions which tend to be faster and windier they were a godsend.

I have 2 sets of these glasses, one for racing and one for every day. I love the lenses, which are interchangeable, but the LST Actives are great for the varying light conditions of MTB. They feel really firm on your face and even after some of the biggest crashes I’ve had they are still stuck there! An absolute must shading the retinas and keeping pesky branches out of your baby blues.

Okay, so a dual suspension is not the obvious choice for racing world cup and I am among a small minority, but it is a seriously fast bike and also a lot more fun for general riding. With a 69.5 degree head angle it’s slightly more relaxed than an XC racing hardtail (between 0.5-1.5 degree) but still feels snappy in the single trail and more confident in the steep descending. At 9.6 kg it’s on par with the pro 29ers so there’s no weight penalty either. The guys as NSDynamics worked their magic on the RP23 shock so it pedals efficiently to the top of the hill while saving my butt on the way down.

So that’s just a few things from the armoury. I’ll wait until I see the course in Belgium to decide between the Schwalbe Racing Ralphs or Nobby Nics but the latter certainly have the mud clearing advantage. Crank Brothers Egg Beater 11 pedals really come into their own around here too when you’ve hiked-a-bike and need to clip in with muddy cleats. It’s a brave soul who runs Shimanos and a frequently frustrated one as my riding buddy found out yesterday.
Next week will be my race report from the Houffalize World Cup. Thanks for reading! J
Posted by Jodie Willett at 11:41 PM No comments: