Where the hell is Goombungee?  The question on everyone’s lips and evidently quite a few riders never managed to find it as there were a total of 5, count em, 5, in the Elite Women’s race.  At 2.5 hours from Brisbane it might have been a paddock too far for many competitors, especially considering we were all racing for glory and a $2 medal.  One saving grace was the discovery of a Zarraffa’s café in North Toowoomba which opened at 5.30am – there is a god!

With only five elites and two under 19s it was difficult to know how to play the race.  It was one of those lively spring days where the wind seems to come from everywhere.  When you think you have the direction pegged and try to shelter behind another rider you’re still being buffeted.  I decided pre-race that I wasn’t going to endure 5 hours of driving to tap around and sprint it out in the last 300m.  Forcing the pace up every climb the bunch was down to four by the second lap – the elite podium with an under 19 tagging along for the ride.

We still had at least an hour and a half to race and after a few attacks on the third lap the fourth was pedestrian as everyone conserved energy for the inevitable attacks on the final go-around.  While it is not the most mountainous of courses, Goombungee has three short climbs where gaps could be formed.  It was the last of these, just 1km from the finish line, where a sharp acceleration by my Pensar Hawk team mate Kat Garfoot, decided the race as she pulled away over the top.  I tried to go with her but I’m definitely feeling more ‘diesel’ like these days and going from tooling-along to warp-speed is not something my legs will co-operate with.  As Kat disappeared down the road, I kept looking back as I had managed to gap previous State Champ Simone Grounds and hold it to the line for a silver medal.

People often ask me if I prefer racing mountain bikes or the road.  While MTB is my first love, road racing can be awesome, but is very dependent on who shows up.  Therefore, is far less fun when hardly anyone shows up!  Such a shame as the last two state RR champs I have raced, I’ve shared the podium with two-time national Crit champ Kirsty Broun, Oceania TT champ and Olympic rep Shara Gillow, Italian pro-rider Carly Hibberd (RIP), and Katrin is currently ranked 4th in the National Road Series so it can’t be said that the competition isn’t hot! 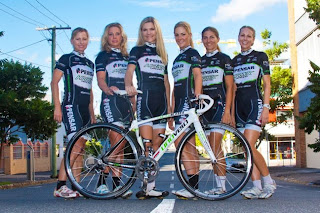 Although I understand the struggle to get permits to race on roads with such anti-cyclist attitudes in society it would be nice to occasionally race for a state title within shouting distance of interested spectators.  A little closer to the charming regional centre of Toowoomba would be nice…if only to make the coffee run shorter.  A big thanks to Ian, David and Robyn of Pensar Hawk Racing and to all the girls who came out to hurt.
Posted by Jodie Willett at 3:52 AM No comments: