The aftermath of an MTB marathon is never pretty.  Human detritus in salt encrusted jerseys litter the grass just beyond the finish line, containing the vomiters, the crampers, the bleeders.  But overwhelmingly they are also the grinners and sometimes the criers, with sweet, sweet relief at finally making the finish line.  I generally fall into several of these categories, so I’m definitely getting the full ‘epic’ experience.

Road tripping with the MarathonMTB crew that morning we all knew what was coming.  Sure we were swapping war stories of previous adventures and full of pre-race taper energy but there was a general understanding that the next 4 or so hours were going to hurt.  Each of us were establishing the reasons we race and put ourselves through this unpleasantness:  personal satisfaction tinged with masochism; glory; cash to pay for the next race - but mainly to accumulate more war stories to tell on the next road trip.

After beginning its life as a point-to-point race the 10th Flight Centre Epic is now run in a more participant friendly loop format, starting and finishing at Spicers Hiddenvale.  Even more friendly was the 50km checkpoint which was back at the start/finish so bottles could be left to pick up mid-race but there was also plenty of water, Shotz electrolyte and fruit at multiple spots which took away the usual anxiety of being stranded dry on a scorching QLD spring day.

My marathon races follow a predictable pattern now where I struggle for the first hour, when pace is too fast and attacks are going, and then suffer for the last hour when my legs are empty and seem to have quit negotiations with my brain.  And so it went yesterday with National XC champ Jenni King and 8 time Epic veteran Naomi Hansen gapping me in the 15km.  Being one of the few elite riders with a camelback my plan was to consume as much fluid as possible over the first 50km as drinking would be very difficult with 37km of predominantly singletrack remaining.

On only the 3rd ride of my new Giant 29er hardtail I was very conservative on the technical sections, not knowing the limits of the bike.  That faded quickly though after several ‘eyes shut’ moments, sure I was headed for a crash only to have the big wheels roll out of it.  If I am ever going to suffer the roughness on a hardtail the FC Epic is the race I do it in, but with 20 psi in the tyres it was strangely forgiving and once we hit the major climb of the race 30ks in it was also very fast.  Feeling renewed on second-hour legs I rode away from King and Hansen on the climb and worked to extend the advantage for the next couple of hours.

Having raced a 24 hour solo out at Hiddenvale in 2010 it was comforting to be on familiar trails over the last half of the race.  The course looped over itself several times which was a bit confusing in the exhausted delirium of several hours of racing, leading to many moments of wondering if I’d missed a turn.  In fact this is the first Epic where I HAVEN’T gone off course and had to carefully hoist my lycra clad butt over a barbed wire fence so kudos to the course marking!  However at 70ks there was an oddly placed sign which read ‘8kms’ which caught many non GPS equipped riders out as they emptied the tanks thinking the finish line was nigh.

Having drunk to the point of getting a stitch in the beginning I now had a pounding head as my dehydrated brain rock back and forth due to the difficulty of getting bottle to mouth on the trails.  I had regressed to merely riding, not racing, and was very grateful to be coming up through slower riders finishing the shorter 50km race as it gave me an excuse not be maxing out the pace – I was just being courteous, right?  With a few mere hundreds of metres to the finish line some riders lay spread-eagled beside the trail and it was encouraging to see people hurting more than I was.  EVERYONE hurts – some are just riding faster while they do it!

There were no tears crossing the finish line, just a desperate search for fluid and a few all-fours moments to relieve my aching back and my nauseous stomach simultaneously.  Apologies to the people I left mid-conversation throughout the day but my hasty exit probably saved your shoes.  As usual I didn’t get to speak to as many people as I would have liked to and need to book at Spicers one year so I can sit back on the lawn and relax with a glass of wine instead of beating a hasty retreat back to Brisbane and real life.

Thanks to Donna Dall from PCS for my race winning form, Liv/giant for the sweet new bike, the boys at For The Riders for another mechanical-free race (owner Tim did the 87ks on a singlespeed – pure madness), Darryl at Shotz nutrition for fueling not just me, but the entire event, Schwalbe tires – the Snakeskins are now Epic-proven, Owen from Ride Mechanic and his amazing Bike Milk chain lube and Moonshine chamois cream (no friction in either area, thankyou!), and the Fleur & Hayden Brooks in conjuction with Spicers for the great organisation and trails.  Also thanks to the 1600+ competitors who supported South-east Queensland’s iconic event. 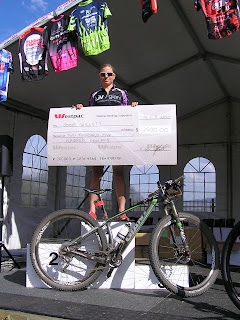 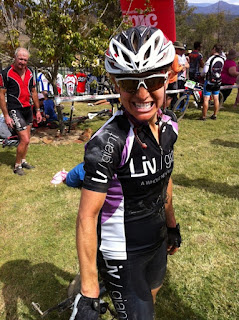 I was waiting for an opportunity to have a big ‘ta-dah’ with my new toys for the upcoming season.  But with the best plans going astray (and this plan not even being close to my best) the cat is out of the bag.  Yes, I am on a 29er hardtail this year, riding for Liv/Giant.  Despite being thought a 29er ‘hater’ I have never been – I have merely been bemoaning the lack of options for someone of my sub 165cm stature.  The strong demand for 29ers has resulted in basically all new imported bikes coming fitted with the big wheels and 26 inch wheels seemingly confined to European world cup courses.

Having accepted that 29ers are possibly faster, or at least no slower, than 26ers the choice which remained was choosing a brand.  Of course I wanted a super light bike with nice geometry and lots of carbon and titanium goodness but I am also focused on what I can do off the bike to promote the sport.  Liv/giant is the perfect fit with their commitment to womens’ participation in cycling for fun and a healthy lifestyle.  In my coaching role at Progressive Coaching Systems this is also a big goal for us and an area we hope to make inroads in the future.

With the Flight Centre Epic on this weekend it has been a bit of a rush to get used to the bigger wheels but also being back on a hardtail for the first time in 2 years.  I have become such a lazy rider and my butt is now paying the tax!  We are still awaiting the 2013 model so Giant have generously loaned me a bike until it arrives.  Being pretty keen to perform well in Queensland’s premier MTB Marathon a few modifications have been made…


Schwalbe Racing Ralph Snake Skins which are the second lightest in the range with a slight weight penalty for the security of added puncture protection.  Good for 90% of trail conditions the RR model has been my go-to tyre for 3 years now – if it ain’t broke, don’t fix it! 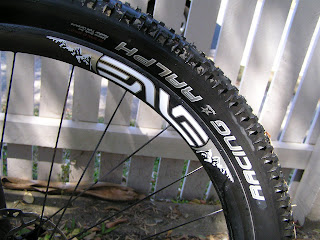 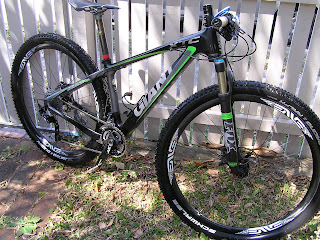 Also continuing their support are Shotz nutrition and Ride Mechanic keeping body and bike running like well-oiled machines.  I love both of these companies for making great products which perform, but also because they are Aussie businesses.

I’ve heard there are a record 1600 riders entered for the Epic this year which shows that mountain biking is très popular in south-east Queensland.  I can’t wait to tow the line at the race which started it all!
Posted by Jodie Willett at 9:26 PM 1 comment: