It’s took me until Day 3 to remember why I came to Margaret River.  Yes, this is a famous wine region.  But as elite riders we’re here to perform so it’s not like we’re out getting slaughtered after every stage (no matter what stories you hear!).  I came to see the countryside and to find out if there were any good MTB trails.  We’re talking single-track because, let’s face it, no one comes to the other side of the continent to ride fire-road, no matter how pretty the views are.

The good news is that Margaret River is on track to be an MTB Mecca.  Much work has been done since 2011 and the Pine Trail could be mistaken for NZ’s Rotorua, while others are typically WA with pea gravel at every corner.  The sheer height of the berms and number of table tops resulted in a lot of “woo hoo!!”s echoing through the forest on the penultimate state of www.capetocapemtb.com.au .  It had restored some faith in the riders after a shocking opening stage containing a 2km beach run/ride through the soft sand or Indian Ocean depending on how close you got to the ‘good’ sand (i.e. sand that didn’t swallow your wheel and stop you dead).  A few people were physically washed off their bikes by waves – not usually something you have to anticipate during a mountain bike race.  The 2.25 Racing Ralphs kept me afloat but my short legs were not optimal for the sand dune dash back to the trails. 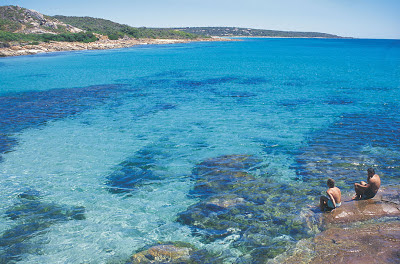 Event organizers seem to have taken a ‘broccoli before dessert’ approach as each stage was better than the last.  The second day was when my legs completely died – a combination of being a little over-done when I arrived and picking up a virus on the flight over which caused my lymph glands to swell to the size of golf balls and my throat was struggling with all those razor blades I’d apparently swallowed.  Unfortunately this was the day of the dreaded ‘double stage’ with the Red Bull shoot out Super D at 5pm.  A full 12 hours in cycling knicks and I was feeling most unsocial, but grudgingly admitted that the mostly downhill trail at ‘The Pines’ was worth it. 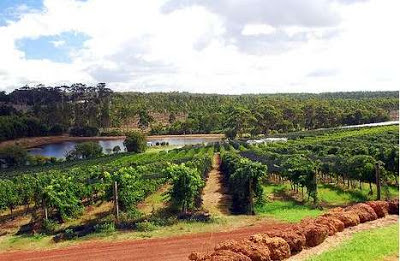 With Jenny Fay running away with the lead and third place being a fair gap behind I settled in to defensive mode, hoping I wasn’t suffering from anything exotic that would have serious repercussions down the track.  It allowed me to have a little more fun with the event, riding with Kiwi adventure racer Nic Leary following her lines a little too closely as she overcooked a massive berm and we both catapulted into the forest, laughing.  Putting faces to the names of some www.pcscoaching.com.au  clients was also a highlight of the trip.

Trying to do this race without the support of a team with drivers and vans is a big mistake.  I was very lucky to call in a lot of favours and goodwill from the Rockstar team, Shimano and even the camera crew to get me to and from the racing points and accommodation.  In retrospect the plan would be to base in Margaret River, a town so cool I was window shopping in the real estate agency.  Urban Bean made the best coffee of the week and was open at 6.30am for a pre-race heart starter.  There are plenty of great places to eat in the main street and I am regretting passing up the steak at the Settlers Tavern in favour of the Thai beef salad (never order Thai beef salad unless you are actually IN a Thai restaurant!).  I love my Shotz but at the end of the day I was very grateful for something less sweet and ‘gel-like’.

The list of wineries we raced through reads like my favourite aisle at Dan Murphys’s but the most memorable sight was the ocean – I’ve never seen water so clear and perfect aquamarine in colour.  Due to my pathological fear of sharks I’m not much of a beach person but at the end of the racing I was straight into a bikini to wade in the still waters of Dunsborough beach to wash away the dirt and sand of the last 4 days and make some dent in the obligatory cycling-tan.

It was a hectic race and would require some careful logistical planning but I will definitely be rushing back to the region.  In a word – breathtaking! 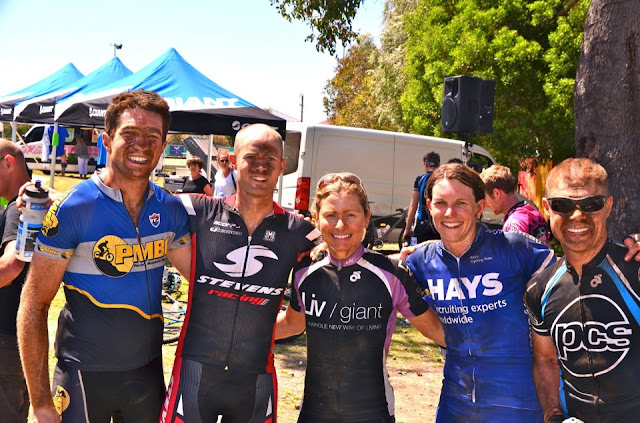 Many thanks to my sponsors:  Giant, Ride Mechanic, For The Riders, Shotz, Schwalbe & PCS.

Posted by Jodie Willett at 6:30 PM No comments: