Sitting in my doctors office on Friday a had a decision to make.  After 3 weeks of being floored by a virus I also had a kidney infection and would need antibiotics.  A legacy of being in knicks for 14 hours during the OHV24 – such a glamour sport!  It was hard to imagine racing the toughest XCM National Champs when I couldn’t even wee properly. Should I even bother getting on the plane? The doctor gave me the all-clear to compete but I don’t think she really understood what I had signed up for – and in the end, neither did I.

Facebook revealed many riders had been in Atherton for days, scoping out the course.  With 3300m of ascent in 100kms I thought ignorance was bliss.  If I’d cut one lap I doubt I would have fronted on Sunday for three of them.  This is not a race I would wish on my worst enemy.  The climbing was relentless and steep.  There was no way to ride easy unless you were walking.  Even walking hurt.  The only flat ground was the kilometre of fire-road from the start line to the first singletrack.  Everything else was back-achingly up or bone-shuddering down.  Several long descents induced lactic forearms and hand cramp from braking whilst holding on for life.

Despite my lousy lead up I was sitting comfortably in third just behind defending champ Peta Mullens and Jenny Fay at the end of the first lap.  My legs felt surprisingly fresh and I was making a strategy for the rest of the race when I heard the fateful sound of Stan’s liquid escaping from my rear tyre.  I spent a while determining if it would seal but eventually accepted that I would need to put a tube in.  It took several goes to get the bike going again after I watched Jenni King and Liv/giant team matesTerri Rhodes and Sarah Riley pass me.  I stopped again soon after for another CO2 cannister to avoid pinch flatting on the steep rock shutes of the last singletrack of the lap.  The 7 minutes I spent trackside were enough for my legs to shut down and I had lost all motivation as I knew any chance of a placing was gone.

So with my bottom lip firmly out I ventured out on the second lap, deciding I would enjoy the pretty amazing single track one more time then retire from the race.  Heading up the ridiculous fireroad climb I made a deal that I would not walk.  I did however stop at a few points, have a drink, admire the view and dry my princess eyes.  Imagine my surprise when the defending champion Peta Mullens came rolling back down the hill passed me.  We stopped and chatted for a few minutes and Peta explained that after feeling awesome on the first lap she was now quite ill and dropping out of the race.  I convinced her that I was just tapping around and it might be fun to finish the lap but after a minute of riding together she started vomiting trackside and called it a day.

It was at that moment I was encouraged to continue.  Not because I’d just moved up a spot, but because I realised I wasn’t the only one having some bad luck and feeling disappointed with my performance. People were dealing with the race brutality in their own ways – walking up climbs beside friends or dismounting, steadying themselves with their bikes by resting their heads on the top tube and quietly sobbing.   It really was a lot longer around the rest of the lap than I remembered though and descending felt like a knife being stabbed into the palm of my hands so I told the race commissaire I was out as I crossed the start/finish line.  This was when enduro stalwarts Pete Winfield, Ant Shippard and Meg Carrigan gave me the HTFU speech and after 5 minutes of self-debating, eating, drinking and hurling abuse at them I began my final lap.

Walking most of the climbs I was heartened to see other riders persevering in a battle for survival and for a reward no greater than the personal satisfaction of conquering the course.  DNFs always feel dirty and although I was cursing them at the time I am very grateful for those who pushed me back out there.  It was an exercise in mental toughness as the lap-based courses hold out the tempting option of retiring to the relative comfort of the pits.  My eating and drinking strategy went out the window the previous lap and I contented myself to groveling to the finish where, as a final insult, my right pedal seized 150 metres from the finish line forcing me to cross the line pedaling with one leg.

Somehow I still ended up on the podium in 5th place but merely staying the distance was a victory when I almost didn’t make the start line.  Everyone went to some dark places during this race and I am in absolute awe of all the finishers.  This will be a race memory to call on when I am next in the hurt box.  Now let us never speak of it again. 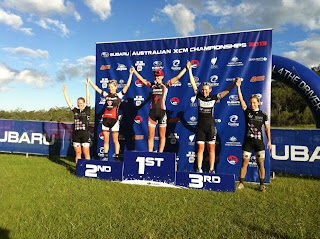 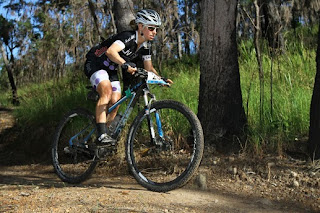