“They look happy, don’t they?”  My Trans-Rockies race partner, Cath Zeglinski was referring to a photo on my sister’s Facebook page.  It showed a group of people on a large inflatable tube, adrift on Calgary’s Bow River, laughing and enjoying the sunshine.  After a recent house party with my sister I can also speculate that numerous vodka jello shots preceded this floating expedition and much merriment would have been had.  Cath and I wondered what was wrong with us – why didn’t activities like these ‘do it’ for us?  It seemed so much easier than flogging ourselves over large mountains for a week on our mountain bikes, and yet, there we were, four days in with the gloss fading on the adventure.  We still had three days of leg-grinding, ass-hammering riding to come. 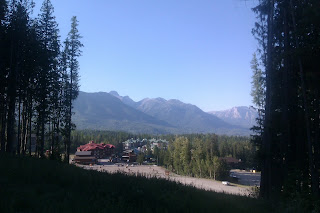 Our Rv campsite in Fernie

Although spectacular in their own right, I don’t believe the Canadian Rocky Mountains rival the Swiss Alps for breath-stealing ability.  Perhaps it’s due to the lack of scale, charming Euro villages and exotic native tongue?  What the Rockies do have is the best singletrack I’ve ever raced.  The first three days based in the British Columbian town of Fernie were a highlight and with stages climbing up to 1700 metres in the relatively short distance of 35 kilometres there was scarce flat ground to be found.  This was offset by the endless descending to the point of forearm cramp and incinerated brake pads.

Bombing down the infamous Porky Blue trail I had several life-reviewing moments due to the loose surface and steep, narrow ride-line with the severe consequences of rocketing off a cliff if I lost concentration.  At the bottom the trail ended abruptly, entailing some grappling across a landslip, bike on one arm, the other arm clinging to shrubs as an anchor.  Sorry – I didn’t see rappelling gear on the equipment list!  There was no mention of ‘flow’ at the post-stage gathering, just high fives that we had all lived.  A lot of riders expressed negative emotions about this type of riding, but for me, this was real mountain-biking where I was put to the choice of slowing down, walking or choosing to ride it out.  It elicited that slightly nauseous feeling and the thought that this was not really what a responsible person should be doing when they have a dependent child and a business to be able-bodied for.  I call this ‘fun’.

Those used to groomed mountain-bike specific trails were more enthralled by the third stage at the Fernie Alpine Resort.  When we thought we had finished climbing we rounded the corner to see yet another climb leading to some audible “you’ve got to be f***ing kidding??” from riders behind me.  This was quickly forgotten once I hit the cracking descent from above the chairlift all the way down TNT and Rumpelstiltskin downhill trails.  I can only portray the buzz of these trails by saying I lay in my bed at 10pm that evening still grinning.  The berms; the wood jumps; the rock drops – and the sheer speed that my lactic hands were unable to mitigate.

When I signed up for the TR a year before, the pairs entry was the only seven day option.  The solo entry was a later addition but I thought a week of solo racing would be too mentally challenging so I chose to partner with a stage race veteran.  Cath and I met at Cape Epic in 2010 when I was being dragged around South Africa by a stronger team mate and hating life.  This time it was my turn to take the wind, try to find a shared pace and cajole a team mate to the end of each stage.  On the final day I used the incentive of a watermelon martini to keep my partner’s thoughts positive however it backfired when we became so fixed on cocktails we missed a turn-off and had to backtrack.  Focus!  It was humbling to ride with a tough (read: stubborn) woman who turned up for more punishment each day and never downed tools until the race was run and won.  It got me thinking again about what exactly motivates us to endure this in the name of adventure.

Several wildlife boxes were ticked: deer, elk, moose and one ridiculously cute chipmunk.  I had a yearning to see a bear or a cougar (preferably from a distance) but they remained elusive.  Another ‘first’ was nine days in an RV with two relative strangers.  I’m at my most stressed and pedantic during racing so being confined in a small space with others was another challenge of the event.  Our soigneur, Pete, endured the machinations of two, erm, assertive women with very particular requests down to the amount of marbling each cut of steak should possess.  That he did not turn to drinking heavily is quite surprising to me.  By day five I expected us to wake and find all Pete’s gear gone and a ‘Dear Janes’ letter on his pillow.

After 12 years this was the last edition of the Trans Rockies with the event transforming into the Singletrack 6 for 2014.  Details are sketchy at the moment but the trails alone are enough for me to sign up again.  In a happy coincidence my sister has chosen to be married in Canada the week after the race – I love it when things just work! 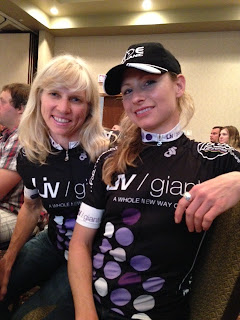 Winning women's team - Cath and I!

Ride Mechanic Bike Milk – rewards you for not cleaning your bike too well. Coat, wipe to clean, coat again and leave it alone!

Schwalbe Tyres – Nobby Nic for traction at the front, Racing Ralph for speed at the back.  Punctures during TR7 = nil

For The Riders – Best bike shop ever!  Bike was prepped to race and not a single mechanical

PCS Coaching – Thanks Donna for making sure I didn’t do too much and turned up fresh!


Ryders Eyewear Canada – I can’t find these glasses in Australia yet, but the Ryders Via model with photochromatic lenses were incredible.  Shady on the exposed ridgelines but clear in the forest.
Posted by Jodie Willett at 2:49 PM No comments: