It would have been nice to recover from the Flight Centre Epic last weekend but it was quickly back to reality.  Client’s legs needed massaging and their programs need writing.  I had been so pumped for the last couple of weeks of racing I think I’d emptied the enthusiasm tank.  The prospect of backing up for consecutive marathons was also a trip into the unknown.  My legs still felt really bad and I was quite exhausted by the time I boarded the flight to Canberra.

The Kowalski Classic was a late decision but I had heard about the quality and quantity of the single track which enticed me away from summery Queensland conditions.  I didn’t expect to be shivering in 1 degree temperatures on the start line in the middle of a field outside Queanbeyan though.  Staying in the car for as long as possible I attempted a warm up along the fireroad but this became an exercise in irony.  Eventually I found a sunny spot near the start line and just stood as still as possible and I ended up doing the entire event in arm-warmers feeling very comfortable with my choice.

The race headed straight up a climb after the start and five girls took off ahead of me.  I quickly realised my legs were still toasted from the previous weekend, compounded by lack of warmth and I had no choice but to let the others go and hope I saw them later.  With the course consisting of about 90% singeltrack though, it was hard to tell if they were 30 seconds in front or 5 minutes.  Plodding along at my own pace and taking time to drink and have a Shotz gel on the rare occasion we were on a fireroad the first couple of hours passed swapping positions on the trail with some male riders.  Concerns about being impeded on the narrow trails were allayed as the ‘wave’ starts meant I was riding with people of similar speed and ability.  Following one rider who was taking some smooth lines reminded me to stop fighting the singletrack before I completely exhausted my upper body.

At around 2 hours I had passed most of the other female riders and Jo Bennett and I were riding together when we hit the 50k feedzone back at the start-finish.  It was so great to see a legend out on the trails again after knocking out twins and I remembered how she thrashed me at my first Red Centre Enduro.  I could not get rid of her on the singletrack and I knew my upper heartrate zones would be no-go areas for this race so all I could hope is that my endurance would last slightly longer than hers.  Working the hills in some of the technical muddy sections I got a small gap, kept the gas on and hoped it would hold.  Again, it was hard to tell how big that gap was and every time I hit a fireroad I was looking over my shoulder.

With about 30 minutes to go I was slightly hallucinating.  The course-marking signs were moving in my vision and I kept seeing things out of the corner of my eye which just weren’t there.  Except that exceptionally large blackish wallaby – I’m pretty sure that was real.  While the singletrail was fun for the first half, that constant swinging back-and-forth was making me a little nauseous now and open road was a nice reprieve.  As usual it was great to climb off my bike under the finish arch and take the win, with Jo less than two minutes behind me for a Liv/giant one-two. 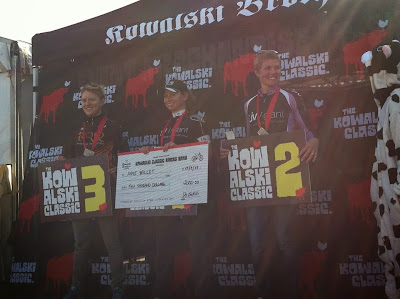 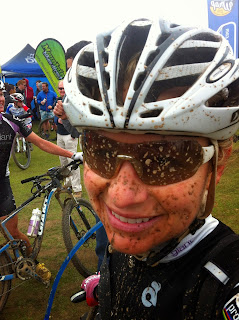 In only its second year I am surprised at how well the event was run – easy registration, parking, started on time and the course-marking was spot on.  The trails are everything people said they were, but I seriously underestimated how taxing riding that much singletrack would be.  My arms and back are sorer than my legs!  As Jason English said on the podium: Canberra has some amazing trails and I’d live here – if it wasn’t so cold.

I’m looking forward to taking some time away from mountain-bike racing for the rest of the year and gear up for a summer of criteriums and the Hell of the Mariana’s road race in December.  Now I just need someone to massage MY legs.

Thanks to Self Propelled Enterprises for a great event and to my sponsors:  Giant Bikes, Ride Mechanic, For the Riders, SRAM, Progressive Coaching Systems, Louis Garneau, Shotz, NS Dynamics and Schwalbe.
Posted by Jodie Willett at 8:13 PM 1 comment:

The Flight Centre Epic has grown a lot since my first in 2006.  With over 2000 competitors over the weekend of racing and an elite field stacked with riders from south of the border, its appeal has obviously grown.  A big factor has been the support of people like Graham Turner of Flight Centre, and the determination and hard work of Fleur and Hayden Brooks of the Hidden Vale Adventure Park at Spicers.  Certainly dispensing with the point-to-point format has made it more logistically possible for many riders. It is also perhaps an escape from the winter of southern states while we have enjoyed 30 degree days.  I use the term ‘enjoyed’ loosely as temperatures which are perfect for bikinis are not really conducive to comfortable bike racing.

My good friend Dean Saffron and his crew are making a short documentary on the race and I was prompted to recount some of my Epic experiences and also to remember how many times I had won.  Four apparently, and I definitely remember three of them.  Memorable moments such as racing in the black soil during ‘the wet year’ with so much mud on my tyres they were jammed on the bike frame.  In 2007 I arrived in the last feed zone and my friend Snake had a picnic blanket laid out with all manner of treats.  The last 20ks of that race were turbo-fuelled by chocolate and Coke and I put 5 minutes into 2nd place.  Last year was probably the most fit I have been and after pulling away on the main climb I rode strong to the end and won over National XC champion Jenni King.

2013 had some memorable moments of its own including the four leading women getting pace-lining tips and swapping turns on the road with Robbie McEwen.  I know a lot of the men riders were aiming to finish in front of Robbie, but I think Robbie was more worried about getting ‘chicked’!  I pulled away from him on the climbs, but this guy can really descend the technical stuff and he would be back on my wheel shortly afterwards.  Eventually pulling away from him, he recounted later the common experience of the Cramp-a-thon that comes with racing in the heat.

I made the mistake last year of using bottles during the second part of the course, which is predominantly singletrail.  This affords little opportunity to take ones hand of the bars so I grabbed a camel back at the 50km mark.  It was a lot easier just shoving the tube in my mouth quickly and getting back to steering than messing around with bottles and it staved off dehydration.  Until the 3.5 hour mark I felt fantastic but then the usual fatigue set in, my feet were swelling in my shoes causing immense pain and I fantasised about crossing the finish line and ripping them off.  Trying not to think about how long I had to go, I just focussed on the 30 minutes to my next Shotz gel, which had been heated to about 35 degrees in my back pocket for my culinary pleasure.

Not knowing how far behind my next rival was I aimed to really empty the tank over the last 20ks, but unfortunately this is when my hamstrings decided to start cramping leading to some awkward riding positions and stretching routines.  It must have looked like I was doing yoga on my bike – ‘salute to the sun’ with a bit of ‘lotus position’ thrown in.  I swear every year I see that red Flight Centre finish arch I shed a tear of relief.  For all those who think the elite riders are doing it easy, please be assured this is not the case.  It hurts.  Every. Time.

One of the most difficult parts is trying to compose myself and say something coherent at the finish line interview.  Dean and his crew then did another interview with me back at the main house.  I look forward to watching a replay as I’m not entirely sure what we spoke about.  I remarked to a few people that when I’m riding I imagine that as soon as I finish that all the pain will stop.  But it doesn’t.  It tends to intensify as the distraction of riding is now gone.  Racing – the gift that keeps giving.  I did managed another recollection on the podium next to 2nd placed rider Tori Thomas. My first MTB experience doing the Pursuit in 2006 was the year Tori came back from spinal injuries sustained after being hit by a car.  She won the Australian Marathon Champs, as the Epic was that year, and I remember being quite inspired by the story and hoping to race at that level in the future.  It was a nice piece of symmetry having her on the dais in 2013. 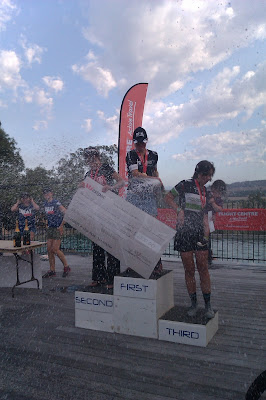 For 7 years I’ve envied the guests at Spicers the luxury of relaxing after the event without having to bundle everything back in the car and commute home.  I finally became one of those people and it was absolute bliss to celebrate the day with some friends and fall in to a luxurious four-post bed and a subsequent coma.  One of the best nights’ sleep on record, followed up with a raid on the buffet breakfast. 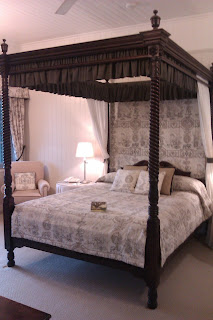 Thanks to all the volunteers out on course.  I had dinner with some of you and am constantly blown away but the number of people who give up their time purely for the love of the sport.  Thanks as always to my sponsors:  Giant Bikes, For The Riders, PCS Coaching, Ride Mechanic, Shotz Nutrition, SRAM, NS Dynamics, Schwalbe, Louis Garneau.
Posted by Jodie Willett at 9:22 PM 1 comment: