If 2016 is going to have a theme, I’d say it would be the year I do things I’m really shit at.  I’ve spent 10 years mountain biking almost exclusively and think I’m reasonably good at it. My previous running history gives me the confidence that, should I put in the time, I could get around a running race in a reasonable manner. Dabbling in some off-road triathlon and adventure events however, has revealed that I am absolutely rubbish at anything involving water. This surprises me as a great deal of my childhood was spent in the water, as you do when raised in balmy Far North Queensland in the days when air-conditioning was a luxury enjoyed by a privileged few. But my speciality was underwater swimming and competitions to see who could dive the deepest and hold their breath the longest. The last formal swimming lesson I had was getting my Dolphin certificate in primary school.

So a variety of events conspired to lead me to enter X Adventure – a swim/run/ride arrangement held in the wine-producing region south of Perth. This was also the concluding location of the Cape to Cape MTB stage race I’d done previously and I was blown away at the time by how exceptionally clear and inviting the water was, although my fear of sharks restricted me to a hip-deep recovery dip at the time. As X Adventure was a Rapid Ascent event I knew it would be heavy on the ‘adventure’ part from my experiences at their other events in Forrest and Alice Springs.

But the thing that would pose the biggest challenge was the swim. Not being competitive, but just making it to the end of 1500 metres. I joined the local triathlon squad, Red Dog, but apparently this isn’t enough – it really helps if you actually GO to the sessions. Attendance was ad-hoc at best followed by three weeks of panic training where I almost blew my shoulders out with paddles. It’s the first time I’ve engaged a professional to teach me a new skill and it’s definitely the only reason I’m writing this blog today. Every session required maximum concentration to work out where all my limbs where going while I tried in vain not to get lapped by the other people in the ‘slow lane’. At my last session before leaving for WA the exchange between my coach, Trent Patten, and I went:

“Well I guess I’m as ready as I’m going to get. If I don’t drown in WA you’ll have a repeat customer”

Great pep talk but probably as optimistic as my form deserved.

After a night of consistent rain, the setting was not exactly what was promised in the event brochure. The big relief was that the winds had moved to off-shore so the sea was pancake-flat. In transition I nervously arranged my running gear and noticed almost everyone putting on wetsuits. Exactly how cold was this water?? And why didn’t I think of that? Envying the butt-floating qualities of neoprene I waded into the water with my seal-like competitors as the gun went off.

I would say the 250m to the first buoy was one of the worst experiences of my life. Four hundred people thrashing around, swimming over me, salt water in my mouth, can’t breathe!  I stopped, seriously thought about pulling out but then looked around. I was now with a group of similar ability. They were swimming for a bit, breast-stroking when they needed to catch a breath and, most importantly, not giving up. I can do this. Even if I have to breaststroke the entire bloody way! After the first buoy I managed to settle into a rhythm (doing freestyle, even) with a group and began to enjoy the swim. It was so clear and the sandy bottom was reassuringly close at all times. I spotted some fish, but thankfully none of the large, bitey variety that WA is renowned for.

Suddenly I was back at the boat ramp with high stoke levels after completing my first ever ocean swim. Okay, so maybe 32 minutes isn’t exactly ‘suddenly’, but that’s not important. Setting off on the run leg I was quickly onto the 4 kilometres of rock-hopping. I didn’t see any scenery as I focussed on not snapping an ankle on the wet sandy stones. Rock running is a discipline of its own. I passed some people, got passed by others, had a few close calls, including one with a fisherman’s hook and line. Finally getting to even ground on walking trails, the 6 ks to the bike transition saw me pick up quite a few places.

At the Dunsborough Country Club I got back into my comfort zone aboard my trusty Liv Lust MTB. The legs were pummelled from the run but the MTB course was almost entirely single-track with little climbing which would be Advantage: Me.  I had no idea how many were in front of me so I just pushed as hard as I could and passed a few other competitors by taking the many A-lines while others went the long way around. The rain had made the sand incredibly grippy and I thought “you just can’t fall off on these conditions” yet around me many people were contradicting that opinion. It was nice to finally feel competent at something! The trail network around Marrinup and the Dunsborough Golf Course is surprising in quantity and quality. WA is establishing itself as a go-to destination for mountain biking. This was backed up by our recovery ride at the Middle Earth trail network outside Cowaramup with it's 24km of singletrack with a Lord of the Rings flavour.

In the end it was close but I couldn’t claw back the time I’d bled in the swim and run. Coming in second still exceeded all my expectations and the previous three hours had been a journey of challenge and personal growth (code for ‘struggle and outright terror’). It was a great course and quite the soft entry for a novice swimmer. There is a huge difference between laps in a pool and a mass-start ocean swim. It’s like training for a MTB race entirely on a wind-trainer.   I’d like to spend more time on my swim but now it’s on to paddling for some big adventure races (See previous blog for recap on paddling ability). 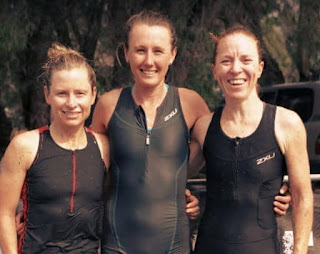 Thanks to For The Riders, Ride Mechanic, Shotz Nutrition, NS Dynamics, Tineli clothing and Liv Cycling.
Posted by Jodie Willett at 3:00 PM 1 comment: