LIFE REFLECTIONS AT A PARKING METER

The parking ticket was the last straw. You know - that one thing, quite a small annoyance in isolation, that just tips you over the edge. A failure to decipher Hobart's unique parking system. That 20 minutes I'd agonised over the relative prices of insulated paddling kit had been in vain. I'd rather have bought the Sharkskins and avoided the fine. Thoughts of 'why does this happen to me' surfaced, as if I'd been the subject of particularly improbable misfortune.

On the contrary. Having great fortune bestowed upon me necessitated the shopping excursion. An opportunity to compete in a widely acclaimed and hideously expensive race at a greatly reduced cost. (Godzone, filling in for an injured team member in case you don't follow me on Facebook.) That I had turned this into a negative emotional state only encouraged further feelings of self-loathing. What the fuck was I doing? Seriously? Forty years old, barely educated, financially insecure and going to play explorers in the forest was the best use of my time? I recall a former team member stating in the midst of an adventure race that this is "just a silly game, really".

Behind every blog-worthy adventure and envy-inducing Instagram photo is the struggle between who I am and who I 'should' be. It would be easy, and lazy, to ascribe this to things like societal expectation. Certainly when my daughter was young there was the mother-guilt of being away competing for months, and being so tired I was barely there when I was home. But now, with a teenager who resides in another state, it was time to let go of this one.

The Should-be me is the alternate person I was could have been. Back in high school, when possibilities were easy to imagine and near infinite. The paths diverging in the woods yet to be encountered. When I was 17 and barely educated and financially insecure. What did the intervening 23 years mean? Why don't I seem to have progressed? What was I hoping to find out about myself in the middle of a 50 hour trek in the Kiwi Fiordlands that I hadn't already discovered in the previous 12 years of physically punishing competition? Did I take the less traveled path but ended up in the most common situation anyway?

The Should-be me would stay home and consolidate my ten month existence in Hobart. She would be an available remedial therapist to her clients who didn't want to see someone else but simply couldn't come on a non-pension week. She would be a reliable employee to the business owners who had given her a chance to resurrect a massage career out of sudden financial necessity. Didn't I owe it to my partner, my daughter...didn't I owe it to someone to stay home and be normal?

I'm afraid. Not of 50 hour treks over large mountains or being upside down in ferocious rapids. My fear is of my life meaning nothing and going through physical and mental trials while learning nothing useful.  And possibly of living on cat food when I'm 70 because I spent my life learning and doing things of no value to society in general. Doing Godzone doesn't scare me. It's coming home and finding that I'm still the same that terrifies.

I would like to push myself to the absolute limit to finally say "enough. I have nothing left" and to draw a line under this physical foolishness. Godzone has a chance of doing this. But people I know ride the Iditarod year after year. What if that point never comes?

So back to the parking ticket and Hobart and throwing bits of mandatory kit in a bag while staying the right side of baggage allowance, doing three weeks of work in one so my coaching clients don't just stare at their bikes aimlessly not knowing what to do while I'm M.I.A. The indecision and guilt were gnawing at me. As I said, exasperated to my partner "I never thought it would be so hard to work out what's going to make me happy!"

Then two significant people in my life made the same statement: Happiness is a choice. Choose to do crazy races in awesome places and be happy. Choose to build a career and pursue life stability and be happy. Stop waiting for some event or place or person to make you happy. Life is a series of experiences which you can learn from but which don't need to affect your state of happiness unless you choose to let them.

Of course that doesn't mean that all choices are equal. There are choices that will predictably make us unhappy. But deciding between a bucket-list adventure and two weeks otherwise spent building a rewarding career is hardly a burden. Most of the choices I give myself an ulcer over are arbitrary. I should use the coin toss method more often. The other litmus test is this: If I was told I had a month to live, what would I have regretted not doing? Sounds extreme but then tomorrow is never guaranteed.

In case you were wondering, there is no point to this. Just some thoughts I wanted to share in case they're thoughts EVERYONE has. And to say thanks James and Trev. It's your fault I'm here! 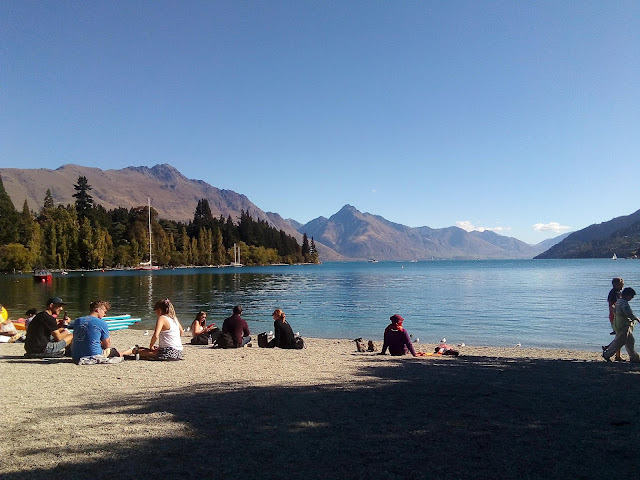