Working over the new year, it felt like 2018 had just kept going on to some sort of 13th month. I needed my New Year ritual to find the attitude I'd carry through the next 12 months. My first big event for 2019 was the inaugural Bike Rite Advanced Women's Weekend in Derby. It started as a Facebook post bemoaning the lack of women at the recent EWS qualifier. The inclusion of trails like 'Detonate' as mandatory put a lot of riders off. My coaching activities are fueled mainly by the desire to help people. So help people down Detonate I would. To be honest, I was pretty nervous about some of the features myself. Some do require planning, deconstructing and thought. And some are better when you don't think too much, which is how I've been riding a lot lately. Being forced to examine some trails led to too many 'what if' scenarios going on in my head. And if you thought about the 'what ifs' on every ride you'd never step out the door. My best advice is to work out the skills you need, practice those skills in a non-lethal situation. Then when you barely have to think about executing them, apply them to the high tax situations. I got a real buzz watching everyone in the group try and achieve something they never would have before. What a great way to kick off the year! 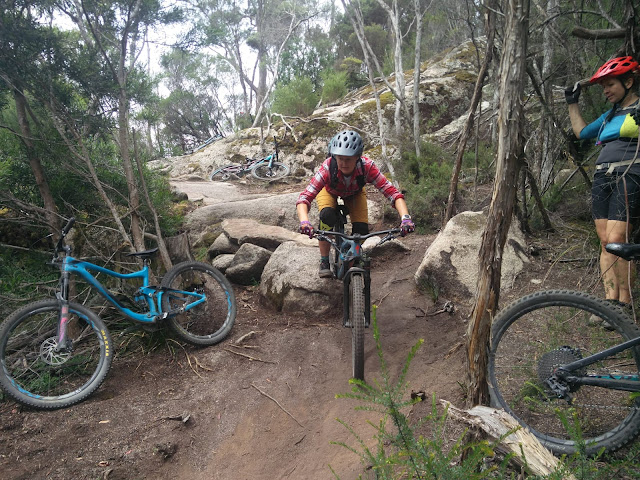 It is unbelievably tiring being responsible for other people's safety so after leaving Derby on Sunday night John and I had a vague plan to head west and explore some of the other riding spots. We had 5 days to fill but the legs needed a rest from the Derby-fest so we set up camp in Narawntapu National Park. Being in an isolated natural area was lovely until we ran out of ice for the esky. Cue pack raft inflation for a short paddle across the waterway and a random walk for ice. It was perfect adventure race training - looking like weirdos, carrying a raft down the main street with only a vague inclination of where we were heading. A friendly local empathised with our plight for cool beverages and spotted me a lift to the IGA. 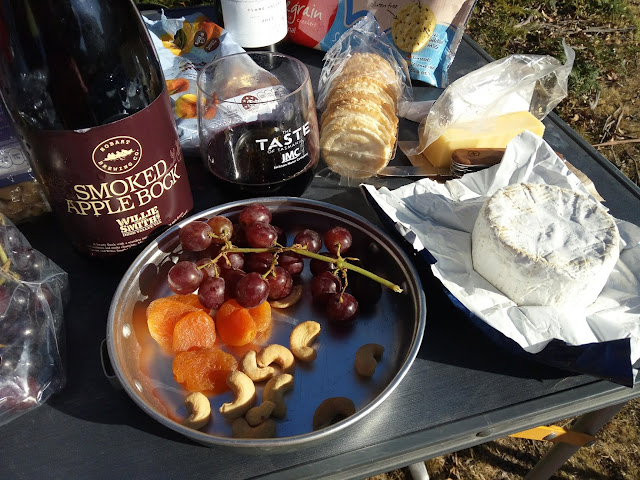 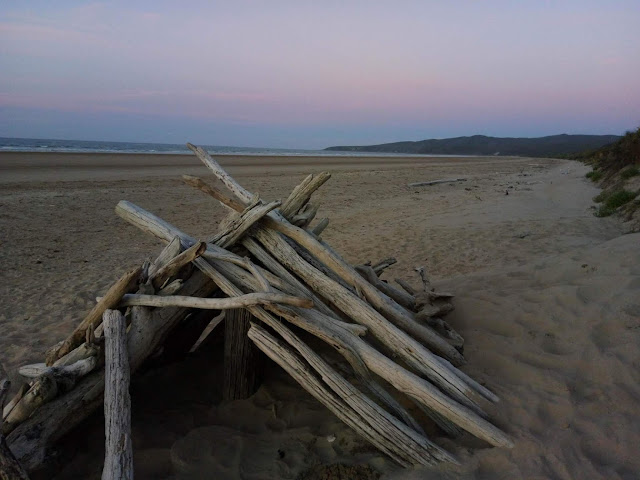 I had fond recollections of the State Champs course so, the next morning, we headed to Kelcey Tier to check out the trails. I also wanted to look at some other options for upcoming kids and women's skills courses there so we did a few laps that didn't include the infamous Organ Donor black descent. There are some really great trails here and it is quite easy to string together a 1.5 - 2 hour ride with a couple of trips to the top. The Rigor Mortis descent is a must-do if you like the jumps. Which I do.

We spent a good portion of the week subsisting on a diet of carrots, hummus and tin soup (great post-Christmas weight loss program) so lunch was an express affair before heading to Penguin. Parking up at trail guru Marcelo Cardona's place (with prior invitation) we did the easy meandering climb before heading on to the Mount Montgomery circuit. Such a fun pump-track descent then into the bike park for some twisty single track with fun wood features and a hectic free ride park at the centre. The park needs a little upkeep and it would be nice to see some of the money being thrown around for trail development go to Penguin to ensure trail access for locals and a variety of MTB experiences in Tasmania. After a lap of the park it was a shorter than expected grovel on tired legs before a ripping descent on Marcelo's private bike park with a few features I might leave until my skills have advanced. Thanks so much to Marcelo and Margo for their hospitality for the evening which meant the tent could stay in its bag for the night. After sunset we headed to the local spot for some penguin spotting and almost tripped over them on the way down to the beach. The fairy penguins are ridiculously adorable as the waddle awkwardly up the beach and it was very difficult not to pop one in my backpack to join the menagerie at home.

Everyone has been banging on about the new Mersey trails so we felt obliged to check them out. Let's say it's a work in progress as there are realistically about 30-40 minutes of riding. But the plan is for 100 kms in total so this is bound to be a future riding destination. Making the most of a warm day we headed up the Mersey River and put the packrafts in. I remember why we don't pack raft. Even with my own raft I find it impossible to get comfortable. Maybe because I'm too short and keep hitting my elbows on the sides. I definitely need a booster seat and a small child to sit in the front so the bow doesn't flip sideways with each paddle stroke. Luckily the current carried us most of the way down although another 200 mm of water would have made it slightly more fun with less bum-hopping moves in the shallow bits. There were enough fun rapids to keep us entertained while we watched the white bellied sea eagles loft on the breeze. The guide book says platypus also frequent the river but we didn't manage to spot any. I will declare the Mersey Tasmania's warmest river. We jumped in for a swim at the gorge which is not something I ever thought I'd say here. The warm feeling didn't last but we stashed the rafts and started the jog back to the car which quickly got a sweat up. 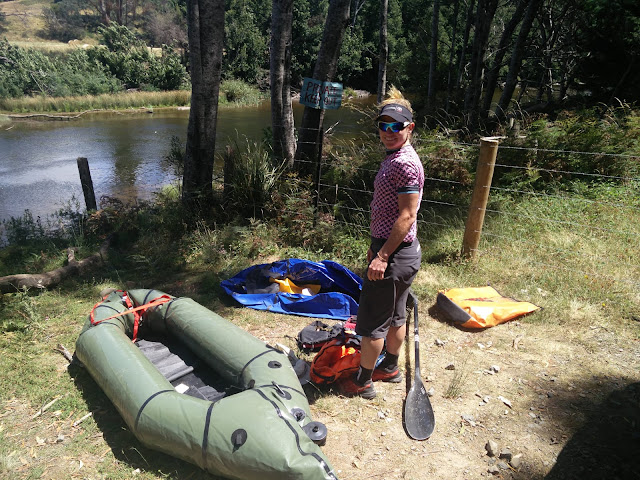 Camping at Arm River for the night and out of phone reception, we carb loaded (cheese has carbs, right?) for the next day's 40 km hike up to Mount Ossa, Tassie's highest mountain. Being so focused on planning for the Derby weekend, I'd forgotten almost everything I needed for our mountain hike like thermals and gloves. A decision I am now ruing after doing 5700m of descending at Maydena with a large patch of skin missing my my right palm. I crash much more trail running than I do mountain biking. The Arm River track is the closest access point for an Ossa hike. Being an offshoot of the famous Overland Track it's well maintained and the new Pelion Hut, about 2 hours into the trip, is fairly luxurious by mountain hut standards. With a steady climb to Pelion Gap my heart rate only spiked while jumping a Tiger snake on one of the many duck-boarded sections. The push up to Mount Ossa peak is a bit of scrambling but tame compared to our Mount Anne adventure. Not as lucky with the weather this time we got brief views of the lower Mount Doris and the valley below. John did mention the cloud conditions and how pointless it would be to get to the top with no view. It has weirdly never occurred to me that we do these things for the views. 8 and a bit hours later we were back at camp and demolishing the rest of the hummus and crackers. Just an FYI that Mr Tiger Snake appears to live at that particular site beside the duck board so we got to say 'hi' on the way back as well. 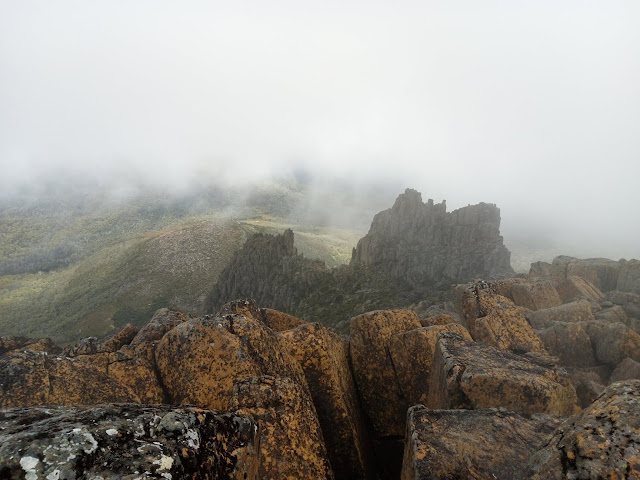 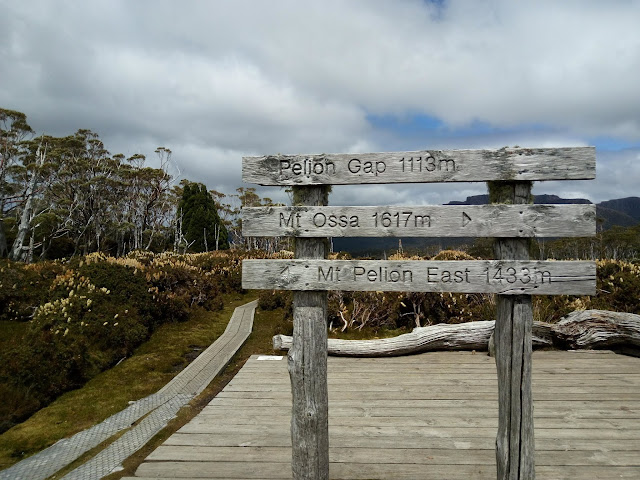 Driving back to Hobart the next day we agreed we'd packed a lot into our week. But that barely scratched the surface of all the places we want to experience in Tasmania. We have a white board full of crazy ideas and will be working our way through them in 2019. We probably won't be the first or the fastest to do any particular route. And there may not be views. I just do it because I can, and one day that might not be the case. 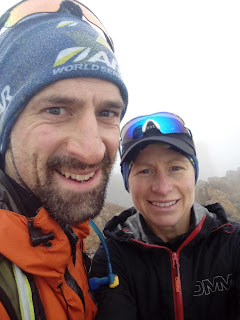 Posted by Jodie Willett at 2:54 AM No comments: