Things have been a bit quiet since my Cape Epic adventure. Taking two weeks unpaid leave and missing a bunch of university lectures made 'head down, arse up' my modus operandi on my return. Aspects of my last blog post struck a chord with some people and my friend, Peter, sent me his hashtag #moreadventuresclosetohome which I think is a great idea. Now I write this having just booked a trip to Scotland later in the year so I'm not saying I'll NEVER travel. But I want to ensure that, if I'm going to burn a bunch of fossil fuels getting there, that it's something that is going to really inspire me. We're meeting friends and family, riding some world-famous mountain bike parks and (weather permitting) having a crack at the Ramsay Round ultra running challenge. So that's ticking a lot of boxes in my mind.

My partner and I are becoming known for a home-adventures/near catastrophes and it does seem logical, living in Australia's adventure capital, that #moreadventuresclosehome will be an easy option for us. A few weekends ago we had an adventure that was less back-country than usual. I'd never been to Bruny Island before despite it being a short distance from Hobart. We drove out of the city to Kingston to avoid riding the same-old roads, and headed off bike-packing. The ferry to Bruny from Kettering is a mere $6 per person return which is ridiculously cheap. It's mainly a ferry for vehicles so don't expect luxuries for the 15 minute trip.


Arriving on big swells and with a wind warning, we headed over the lumpy terrain passing an establishment called "The House of Whisky" which would be getting a visit on the ride home. While people in Hobart were battening down hatches, we decided that pedaling bikes laden with gear into cross-winds was what was really required. We were camping the night and brought our own food which proved totally unnecessary. There is no risk of starving on Bruny. Every 10 kilometres or so there is local eatery with great coffee, amazing view and exquisite local produce.

Wanting to get some training in (or make room for more food) we did the North Bruny loop anti-clockwise and coincided our first stop at the Jetty Cafe at Dennes Point with a passing squall. (Okay, technically our first stop was on the road side where I had to pee is some long grass to avoid the gaze of tourists driving past while John ate a hot-cross bun). The cafe overlooks the ocean and serves a decent soy latte. John, for the third time so far, got soy milk with his chai latte. After almost getting into physical altercations with the last two baristas who assure him "chai lattes are ALWAYS made on soy" I was glad he let the 60 year old lady off with a withering look. If someone can clarify this issue for us that would be appreciated.

Pedaling for quite a while but getting nowhere fast we happened upon the Bruny Island Cheese Co. This is somewhere I'd normally ride past lest it interrupt my structured training. But this is also, it appears, the essence of many bike packing adventures so we pulled in, if only to stop fighting the wind for a while. After a few tastings we figured that the cheeses wouldn't last too well on our trip but we grabbed a loaf of freshly baked sourdough to go with our camping meals and opted for a beverage. John got some beer that tasted like beer and I ordered Simple Cider with ginger. The barman looked my small frame up and down and cautioned "just an FYI, these are 8%" before handing over the drink.


I perhaps should have heeded his warning as I got back on my bike, but it may have given me the courage to sit on the front as we punched into a 70kph headwind over 'the neck' on our way to the island's south. Our plan was to camp at Jetty Beach, but by the time we'd reached the intersection, we chose to take the turn off down to Cloudy Bay to a more low-key campsite called The Pines. We figured this would be more protected from the winds, we were tired and it was a lot closer.

For the record, 'low-key' now means no toilet and no drinking water in our camping dictionary. The former we have dealt with many times but the latter was not optimal with dehydrated meals and bodies. Luckily a couple in a Wicked Camper parked up nearby had plenty of water. They were visiting from Chile and trying to do an express Tasmania trip before the bad weather set in. We hoped they had some indoor activities planned for the next couple of days.

We finished our dinner and John cleaned up while I went looking for firewood. Easter had just recently been so most of it had been used by the camping hordes. I filled a backpack with pine cones figuring they would burn pretty well. On cue as we tried to light the fire it started to rain. We are seriously thinking of offering our services to drought-stricken farmers. Let us camp on your property and you will be assured of opening heavens. It's our special gift.

Waking up to blue-er skies the next day, we briefly headed north then turned east on to what I'd call 'the back way' to Adventure Bay. It was hilly and muddy but quite lovely apart from the almost-head-on we had with a 4WD. Who drives along that track when there's a perfectly good road alternative? He was probably thinking the same about us.

I always attract attention walking into cafes after a mountain bike ride. Being so close to the ground my face seems to attract more mud that usual. Wandering into the Penguin and Pardalote cafe I got a proper hipster-standard coffee while John played it safe with a tea. It sure was nice to have so many opportunities to eat, drink and relax while overlooking a beach. I declined John's kind suggestion of some extra training kilometres by circumnavigating the north of the island again. But I was coerced into climbing the 200 steps (a kind boy counted them for us all the way back down) for the obligatory photo over The Neck.

Back at the House of Whiskey - well it seemed rude not to. And it was after 12, windy and cold. Disappointingly we discovered that there is, in fact, no whiskey produced on Bruny Island. The Trapper's Hut label is actually produced in Moonah which is at the bottom of our street. We opted for some mulled wine, heated gently and sipped in the impressive interior display of whiskeys and gins. Heating up alcohol is still quite a foreign concept to a Queenslander but mulled wine and hot cider have been a revelation. Some other customers commented that they seen us riding, what hard work it must be and how crazy we are. But then I think about how much tasty local food we enjoyed which fueled our human-powered weekend. And there's a special type of bonding that occurs between a couple who have had to take turns riding into the wind together and laughing about how bad things are at times. You just don't get sitting in a car. I really enjoyed a relaxed weekend of riding, eating and drinking and can say, if this is bike-packing, I'm in. 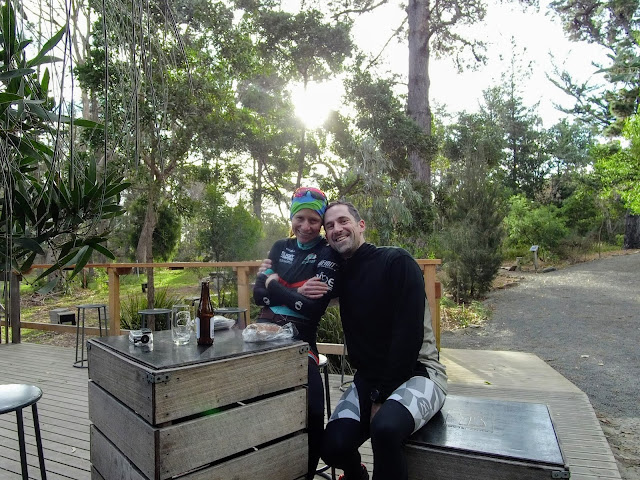 Posted by Jodie Willett at 10:45 PM No comments: