John and Jodie do Scotland

While there are probably far more extensive and detailed reports of trail riding in Scotland, I think it's important to document our trip, as we relied on other people's blogs to have our own adventures. Why would be go to Scotland to mountain bike when we live in the MTB paradise of Tasmania? It was primarily a trip to meet my partner's family, with some mountain biking thrown in. And I still love exploring trails in other countries and getting their particular flavour of the sport. We only scratched the surface of the riding here we'll certainly be back.

Close to central Glasgow, this was the site of the 2014 Commonwealth Games cross-country. The race course is now the major blue loop of the park with a maze of smaller tracks creating shorter loops. We opened our riding account here after the jet-lag had faded and it delivered up a typical Scottish day of freezing side-ways rain. While not overly technical, it was fun to burn around. It also has a pump track on steroids and a dual slalom that could cause some damage at full tilt. John's mate and local MTB and outdoor legend, Gary Tompsett, played tour guide. All was well until we came across a kid who had axed himself and John went into doctor mode. Luckily the parents didn't seem to phased and they were on their way to the nearest ED. They were parked close to the pump track so after we waved them off it was one more time around... 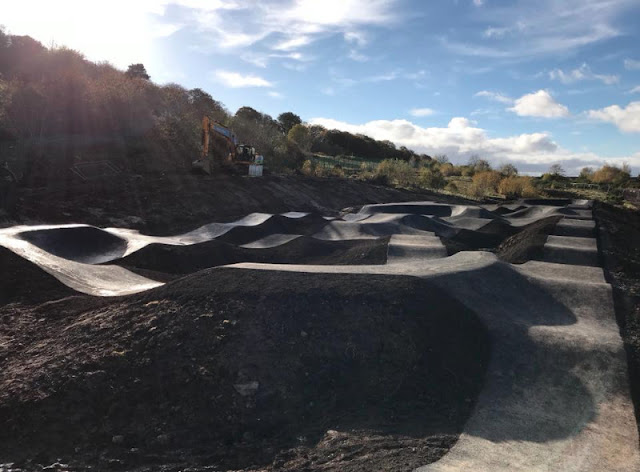 Glentress is the better known bike park in Scotland but we got some off-piste recommendations in Innerleithen from Rab Wardell who is a bike coach in Glasgow. Rab was my instructor at the UCI coaching course in Switzerland and it was fantastic to see the work he's doing with youth across all disciplines. There are two parts to the bike park. One has a perfectly good shuttle but we chose to grovel because I was feeling fat and unfit after days of travel and being subject to extraordinary Scottish hospitality. (I think they make human foie gras.) It was a pleasant climb up the main fire road for 400 vertical metres. We dropped down Angry Sheep, then rode up again to do Green Wing beside it. These were a good warm up before going over the back to Bye Driver which was short but sweet if you like insanely tight corners and pumping. Caddon Bank descent is one of the more mainstream tracks but with easy drops and lots of swoop it's a favourite. We dropped into the local bike shop and had some chat with the owner of I-Cycles then headed out to the golf course side with more tips for round 2. Another long climb to hit a new track called Big Baws on the bike shops recommendation. This is trail of the trip. Black traversing track with narrow chutes, wet roots, rocks, and scree. The type of trail needing constant half pedal strokes and pumping to keep momentum. So physical, so good. I had my enduro bike, dropper post and flat pedals. But John was on a borrowed XC bike and clips. He certainly had 'big baws' (or just sore baws) at the end. We finished is the afternoon sun with the iconic Rocky ridgeline track with brilliant views over town reminiscent of Trouty at Derby. I could have spent another day here and the lovely town has some inviting post ride beer gardens. But sadly the schedule did not allow it and I was forced to have another family 3 course meal and several large glasses of wine. Devastating. 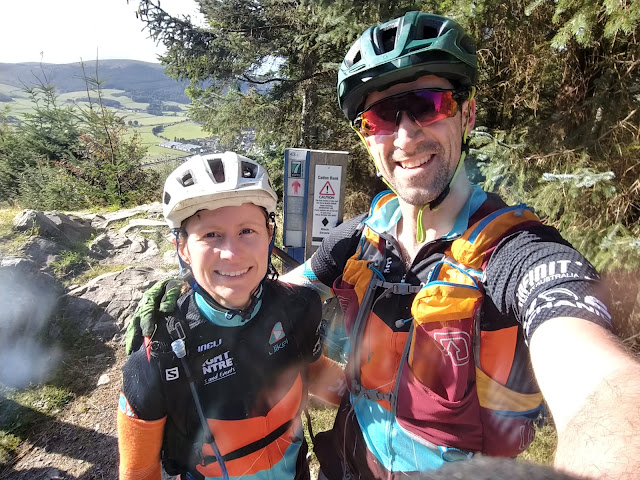 This was a big drive day from outside Edinburgh to Fort William. But we'd heard Laggan was worth a look. There are 4 main loops - black, upper red and lower red and a jumps track. Each loop involved climbing the same fireroad back to the top of the hill. I liked that the navigation was super easy and it was well sign posted. I get lost in carpark so this is my kind of place. We could ride all the trails here in 2-3 hours. Back Sack and Crack (black) reminds me of a Black Stump / Lower Shearpin cross (Derby reference) and was a highlight with tons of rocks, drops, pumping and line planning. The upper and lower red trails were just good clean fun and it felt good to go fast again after the physical black trail. The jumps track was OK but nary a table top in sight. It was more whoops that one for the serious jumps fan. 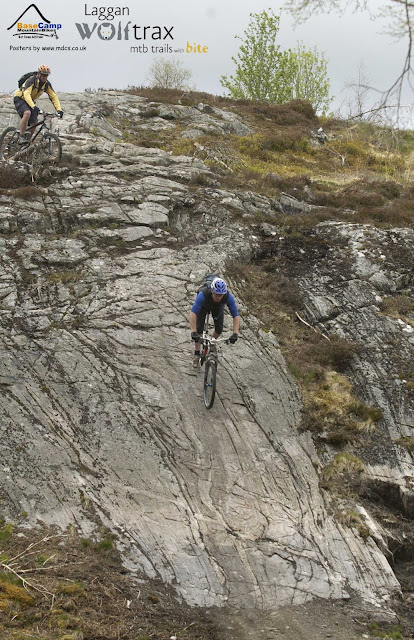 On a perfectly cloudless day, a rarity in Scotland, we headed to Kinlochleven. Some steep jeep trail climbing at first that became more friendly as we headed back-country. The low arc of the sun lighting the mountains in that particular romantic way. With a clear vista down the valley and loch we were fortunate to come across 20 volunteers for the Glen Coe Skyline run series making the most of the photo opportunity. Finally a couples shot that didn't have John's camera arm missing. After a false start and climb back up the wrong trail, we turned right at the NEXT trail for the Pipeline traverse. A track that sometimes peters out to flattened grass and riding on the huge water pipes trying to find the right gear to pedal between the raised joiners. While I admired the views, after a while walking through thick bog trying not to lose a shoe got frustrating. John was extolling the virtues of proper Scottish mountain biking while I was wondering if Scots actually rode their bikes. It was a good challenge trying to pick lines and keep momentum and reminded me of my first days of mountain biking before flow trails. The Ciaran Path descent was used in the EWS but I assume competitors walked the impossible boulder strewn rock sections. It was barely rideable with loose baby head sized rocks and it was utterly fun. We celebrated a great day out by washing our bikes in the river. Scotland has a distinct lack of hoses for such a wet country.My biggest regret is having to leave the area so soon. I felt at home in the mountains and the quiet of the valley is the perfect holiday for me. The drive back to Glasgow involved a lot of neck craning to look out the back window on a breath-taking day. 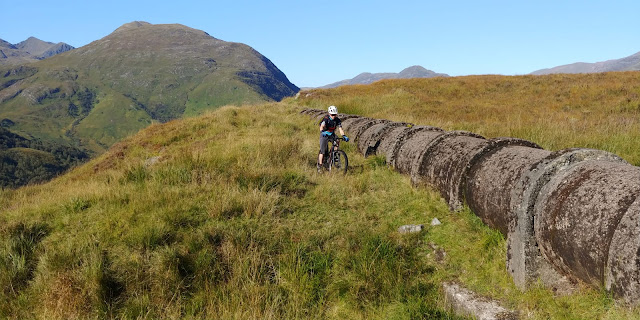 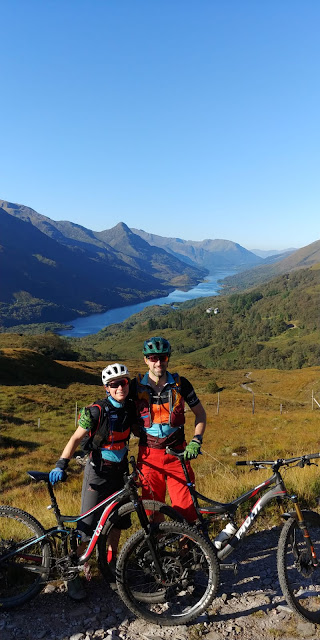 Thanks to the following supporters of my adventures:

Posted by Jodie Willett at 2:13 AM No comments: