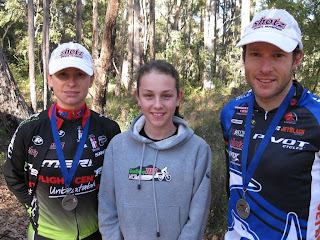 One of the perks of this ‘job’ is the opportunity to see parts of the country you might otherwise have gone your whole life without visiting. I was lucky enough to receive an invite via Shotz to race the Dwellingup 100 MTB marathon, about an hour outside Perth. WA was the only state in Australia I hadn’t ticked off my list and I had been looking for an excuse so off on another adventure I went!

Arriving in Perth it reminded me of a newer, shinier, less crowded Brisbane. The river was bigger and bluer and I was aware of that alleged Brisbane-ite inferiority complex that Victorians refer to. As a guest of Trievents I was chauffeured to some very comfortable accommodation in the city where I quickly put together my steed and went exploring.

You can tell a lot about a city by its bike paths…and Perth really loves cycling! The cycle paths are wide, well marked and go on forever, all the way out to Fremantle, which is where I headed to see a West Coast sunset. Cottesloe is definitely somewhere to head for a lazy Sunday ride and have coffee overlooking the ocean. Unfortunately it was Wednesday evening so I headed back to the apartment before it got dark. My riding partner, Jason English, and his wife Jen were arriving at midnight so we could head south the following morning.

It wasn’t completely a holiday and Jason and I were put to work, if you can call it that. We visited five primary schools in 2 days to show off our equipment, answer questions about cycling and do a few drills and races with the kids. Dave from Trievents was keen to promote the kids 14km race and the principals were aiming to get more kids riding to school instead of being driven. It’s amazing what a difference an interested teaching faculty makes with one school having about 15 mountainbikes bought especially for students to use! Can’t imagine what that took to get past the P&C.

Tony Tucknott is the man with the plan when it comes to Dwellingup and has been instrumental in getting the race up and running. He drove us out to the Turner’s Hill section of the track, which would be an 11km timed section during the race with $100 for the fastest male and female. This loop is some of the best singletrack you will ride – fast, flowy with some doubles, gap jumps and log rides thrown in for fun. Once you got used to the pea-gravel surface in WA and the 2-wheel drift you could just hook in and enjoy. It was so good we did it twice the rode back to the chalet to continue the carbo load.

Friday morning we hit a couple of loops of the 14km of singletrack that was to be used for the kids race. With nothing too technical they were sure to have a blast, as we did, getting in some dirt time before riding to the next school presentation. The weather was stunning, if a little cool, with not a cloud in the sky. Race day promised to be perfect conditions as opposed to the deluge the racers faced last year.

Race day and we rolled down from our accommodation, 2 minutes from the start line and joined the 800 other participants. In only the second year of the event it was a fantastic roll up and promises to grow quickly each year. With less climbing and bitumen that the epic and more single track I figured the race times would be about the same. I’d only been back training for a week after a break so I was theoretically fresh which was confirmed by my heartrate going through the roof for the first half of the race.

Last years winner Stephanie Russell went out fast and I didn’t catch her until about 20k. We then rode together, pushing each other all the way to Turner’s Hill. I knew I would have to get into the singletrack first as with her local knowledge Steph definitely had the advantage. Once in there I hit cross country pace and tried to get as big a gap as possible to hopefully get the fastest lap time, but worried that I might blow up and not make the race finish.

The course was challenging but fun with some longer steep loose climbs but plenty of winding singletrack to encourage forgiveness. Some of the surfaces are like nothing I have ever seen though, with a smooth clay section where guys were just binning it after putting a fraction too much weight on the front wheel. No one told me about the ‘deep’ pea gravel which caused a few anxious moments descending, then required me to muster my sand-riding skills to get out of.

The weather warmed up toward the second half of the race but I found the combination of Shotz gels and electrolyte tabs, again, the perfect combination. I have finally decided that I am too much of a gumby to eat a bar or any solid food while I am racing and having found a gel flavour I like, I don’t stress about my nutrition like I used to. While Jason was riding a Dual-suspension I was on the Merida o.nine hardtail and don’t think the course is rough enough to make you beg for some more travel. A DS would make the Turners hill section a lot more fun though with some A-lines that were too harsh on the hardtail.

Pushed by Steph all the way I took the win, only five minutes ahead. A former Highland Fling winner, Steph is a quality racer and there is a wealth of cycling talent over here, which suffers the tyranny of distance from some of the major competitions on the east coast. Hopefully with races like the Dwellingup 100 more people will make the journey west to see if they can match it with the locals. WA certainly has a lot to offer on and off the race track and I, for one, will be back!

As always, thanks to all my sponsors: Merida, Flight Centre, For The Riders, Schwalbe, Adidas, Nightrider, Lazer, Jetblack, SRAM and especially Shotz for this opportunity.
Posted by Jodie Willett at 5:07 PM No comments: