Nothing is ever certain in racing, or in life. Until you actually cross the finish line the event isn't won. We have all heard of stories of 'choking' athletes who snatched defeat from the jaws of victory. While I wouldn't say our team choked, we were probably mentally sinking celebration beers while having two checkpoints (CPs) to go and almost an hour buffer to the next team. To not win from that point was quite crushing.

In my pre-race blog I'd laid out my excuses early: dodgy ankles and shoulder. My team mates contributed with their own stories of life getting in the way of training meaning we all felt less than prepared for the event. Tactically we agreed we wouldn't be able to muscle our way on to the podium so we would have to be careful with the navigation and wily with route choice. While marking the maps at a cafe on race morning, we identified some dicey shortcuts. These were opportunities to save chunks of time but we weren't sure how feasible they were until we were on course. There were a lot of checkpoints for such a short race (24 hours although we budgeted on being done in around 16) so our navigators would be working hard.

An 11.30am start was quite luxurious. No crazy early wake up. No stressing about the timing of the pre-race dump (racers: you know what I'm talking about). We started running down the beach footpath, boogie boards in hand to the first CP and then into the warm, clear waters of Pumistone Passage to cross to the sandy headland. While I'd mocked Tom for bringing a $15 inflatable lilo it was a stroke of genius and easily faster than other craft. It was also deflatable with the mandatory pocket knife for the subsequent 20km sand run. I'd made the error of failing to test equipment and kept slipping off my board due to wearing a life vest. This was one of several things I half-assed including using the wrong lube for my feet and putting my cycling knicks in the wrong transition box. Both of these mistakes had abrasive results.

We swapped the lead several times with series leaders Thunderbolt and came into transition slightly ahead for the kayak leg. Course designer Dave Schloss was relaying the message, via jet-ski, that several CPs had been dropped from this leg. Leading for most of the way the field came back together in the shoe-sucking mud while collecting a CP at the edge of the mangroves. We paddled with Thunderbolt long enough for Leo Theoharis to completely massacre the delivery of a joke I just told him. While swapping banter we could have felt we were friends out for a splash on a glorious Saturday afternoon if not for the pace being set. I'd done almost no ski training since moving to chilly Hobart and it told. My inflamed bicep tendon was now on fire with the effort. For those who haven't had this injury, imagine that every time you moved your arm to paddle, run or lift your bike, someone stabbed you in the front of the shoulder. 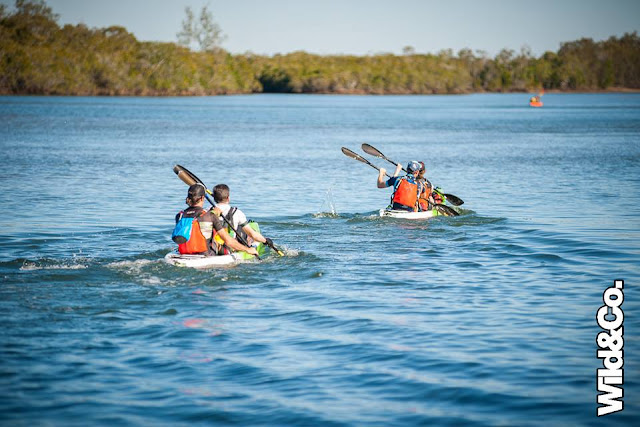 I love races where all the wet activities are finished before sunset. Putting on a dry top at transition, I looked forward to remaining that way for the rest of the race. However I think I spent more time wet during the mountain bike leg as there were several crossings of water ways necessitating carrying bikes overhead. There's nothing like eating a wet sandwich and wondering if it got drowned in that pristine creek or the manky drain we waded through.

My feet were blistered and being perpetually wet aggravated them. When we came to the radical shortcut across Coochin Creek with our bikes, I was very resistant to wading across especially as it looked deep. A couple of locals in a small boat assured us it was only buttock high though and we pulled off the move which would have been a race winner...had we actually won, of course. It was a glimpse of Kohlar brilliance. After that it was difficult to know our position in the field. We kept coming up on teams doing the shorter Fairy Bells event, never knowing if it was Thunderbolt who had pulled some good move of their own. It was actually nice not knowing and getting through the course at our own pace.

I congratulate the organisers, Wild & Co, for including a good portion of single-track. Using the MTB trails around Ewan Maddock Dam added some fun and flow to the usual fireroad smash. Given the terrain was mostly flat I was afraid it would make the event boring. But I was kept well entertained and the time went quickly. Our navigation was not flawless, but they were five minute pauses, not 30 minute forays in the wrong direction. 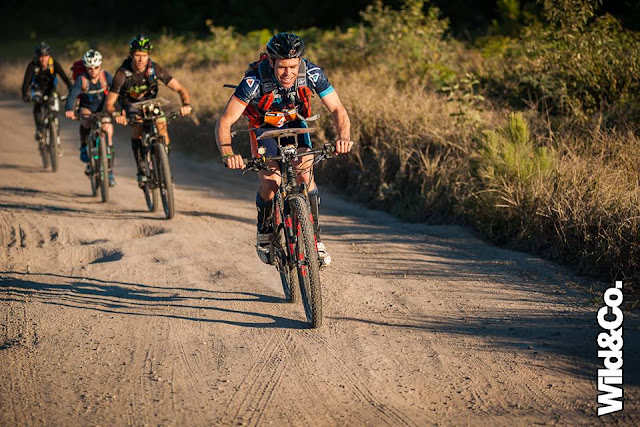 Transitioning from MTB to trail running I went from feeling very comfortable to next-level hurt. Blisters from sand running, no confidence in my ankles on technical sections and a limp, useless right arm left me frustrated and snappy. Team mates offering sugar, intimating I was 'hangry', only added to tension as if they'd asked "have you got PMS?". The going was tough in some sections. When your captain regards bashing through Lantana as a welcome relief to being torn apart by Wait-a-While vines, things are not good.

We emerged from the forest bleeding with large welts all over our exposed skin. Despite me dragging the chain on this leg we got through the trek efficiently and on to the final MTB leg. Not the last time I thought we were only a few hours of riding away from a race finish it ended horribly. There may be a pattern and I should have seen a red flag when we were shadowed by Adventure 1 director, Tod, hinting from the car that we had a good lead and as long as we did not make a huge error we would win.

Clambering over a fence into a field we took the appropriate bearing and started looking for the clue 'fence corner'. There were more cows than corners and after riding up and down for the best part of an hour hands were thrown in the air. We didn't know where we were on the map. In a display of common sense, Jason suggested heading East along the fence we could see in case our bearing was 'off'. In fact we'd climbed over the wrong fence at the start so there was no chance of our bearing ever being 'on'. Corners became more plentiful and we located the CP just in time for Thunderbolt to catch and pass us like a freight train. Demoralising doesn't even describe it.

Resigned to second place, again, we collected the last CP and rolled into HQ to muted celebrations. It's telling when your competition keep saying 'sorry' for winning. I heard some people say we deserved to win. If we did, we would have won. Barring and unforeseen event involving third part intervention, I think you're responsible for most of what happens to you. Mechanical - you should have prepared your equipment better. Crash - you need to up-skill. Lose and hour on a CP - navigate better. We will have the next week to rue what could have been while we pick Wait-a-While splinters out of our hands.

Thanks to the organisers for a great event with simple logistics. Why more races don't use the MTB legs to move the bikes around I don't know. Thanks to my team mates - Jarad Kohlar, Tom Chadbourne and Jason Rutkowski. Outstanding effort guys. Hopefully I'll be in better shape, and mood, next race. And thanks to my sponsors:

What to write about when you really don't feel like you have anything to say? The pre-race blog is not something I've done as a matter of habit. I don't particularly like talking about something in the future, preferring to shut up, do the job then tell you all about it afterwards. The upcoming event, Hell's Bells, isn't one I've done before either so I can't refer to previous events to compare. From memory some former team mates ended up with hypothermia a couple of years ago so perhaps my expectation of enjoying the relatively warm Queensland winter is destined for disappointment? As local AR legend Dave Schloss is setting the course I know it will be challenging but fun which is the most you can hope for in racing. When 'boogie board' is listed as mandatory equipment, this perks the interest.

I'm a little depressed at the lack of racing opportunities in Hobart. Apart from some cyclo-cross there hasn't been much on and, try as I might, I just can't get excited about racing around a field. That said, I am missing a Gravity enduro race 8 minutes from my door step this weekend. It's a drought or a flood. The question on everyone's lips is "how are you handling the cold?". I've actually ceased to notice it. Or, at least, I'm no colder now than I was in April. While out running the North South track, I'd taken off my thermal and tied it around my waist. Comfortably enjoying the contrast of inner warmth with the briskness of the air I checked my Garmin - 1.5 degrees. Righto.

The next question would be "who are you racing with?". Fair call as I seem to be changing team mates like underwear but this has more to do with availability than lack of loyalty. Due to the Adventure 1 series cap of 7 team members throughout the year, tactics also play a part. After racing X Marathon with Peak Adventure the team has reached its 'guest appearance' limit so I'll be joining Jarad, Tom and Jason for Peak Adventure - JP Rutkowski.

And form? Ahem...Normal protocol is to act strong when you're weak which means you definitely don't talk about any chinks you have in your physiological armour. I've never been a rule-follower though so I'll reveal I don't think I've ever gone into a race this battered. After badly spraining my right ankle several weeks ago I started back running too early, inflaming the left ankle due to the pronounced limp I still had. Then focused so much on avoiding pain in the left, I went over again on the right ankle last week.

But that's fine because it takes my mind off the screaming case of biceps tendon inflammation I've developed from, wait for it, carrying a water bottle. Yes, that's right. Apparently holding 600g of fluid in your hand and performing the small circles with your upper limbs which accompany the running action, for 3 hours, is devastating for a tendon. And yet I can go over the bars at high speed on the mountain bike and brush myself off without a scratch. Why does running hate me so much?? Dealing with non-perfect conditions is just part of being an athlete and challenging yourself. I've been in this situation so many times my over-riding thought is "it could still turn out OK". And it often does.

It's a little isolating being at the extreme end of the country. The community here are super friendly and welcoming, but I've realised that racing constitutes a huge part of my social life, which I'm sure it does for most people. It's probably what drives participation more than anything. When we're doing a multi-day race people talk about 'getting back to the real world'. I protest - the racing is the real world! The rest of the world is what doesn't feel real sometimes. Now that's deep. And I swore this was going to be a light-hearted piece. Doh. As Hell's Bells is a shorter event (perhaps 16 hours which is practically a sprint these days) I doubt Middle Eastern peace will be solved while we're out there. But there's still enough time to hang shit on each other, have some laughs and overdose on ham and cheese scrolls.