Hell of the Marianas - Saipan

It’s a pretty good deal being flown to a tropical island for a week and staying in a lovely beachfront resort with buffet privileges.  It’s an even better deal doing this three years in a row.  Somewhere in there I am required to do a 100km race with 1400m of climbing but as a percentage of total time spent working on my tan, it’s a pittance.  Not for one moment am I going to pretend this is hard work, but I’d like to give a different perspective to a story which could just be another piece about what a surreal life I sometimes lead.

I get these opportunities because for most of the time I have minimal social life and am frequently tired.  The times I don’t feel tired are because I’m tapering for a race and it’s not really the opportunity to go nightclubbing or, god forbid, engage in other non-bike activities.  I am very aware that should I start to ride like crap, these opportunities will no longer present themselves.  Races like the Hell of the Marianas are started by people who a) love bikes, b) want to get their community involved in riding bikes, and c) think of it as an investment, if not in building a profitable event, then having positive flow on effects for the tourism and commercial sectors of their area.  My worth as an invited ‘pro’ is dependent on getting people from Australia to, firstly, find Saipan on a map, then go there for the race or a holiday. There are some issues with getting Aussies to this race as outlined below:

1. Limited flights – unless you want to go via Seoul or Tokyo, the only way to get to Saipan is via Cairns and Guam.  With only 2 flights per week out of Cairns (which leave at 1am) your choices are to arrive the day before the race or 5 days before.
2. United Airlines suck – this airline has the monopoly on flights and insists on charging $200 each way for the inconvenience of carrying a bike.  Even Guam residents have to pay this exorbitant fee for a 45 minute flight to the neighbouring island.  Baggage rules are based on a dimension concept which would mean you would practically have to saw your bike in half to fit within the allowed limits.  This is the only airline in all my travels who operate on such a stupid basis. 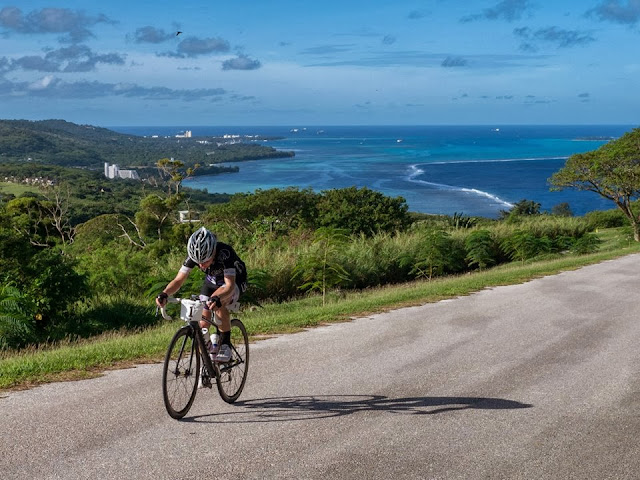 Other reasons to go:

1. 3 feet law – yes that’s right, this small island is already leaps ahead of Australia when it comes to protecting cyclist with a mandated minimum passing distance.
2. Weather – it’s technically winter when the race is held but apparently the only difference between winter and summer is the rainfall, with winter being the (relatively) dry season.
3. Quiet and casual – want to go out to dinner in a singlet and thongs?  No worries.  It irks me in Brisbane how it can be stiflingly hot but you’re still expected to dress up and sweat.  Saipan is a small island and even smaller population and a lot of jungle.  It’s easy to get away from the crowds.
4. It’s not filled with Australians – okay, so I’ve never been to Bali but what’s the point of going overseas to hang out with other Aussies?  All the locals speak English as well as native Chamorro, but if you want to make conversation in the Pacific Islands Club you should brush up on your Russian and Korean.
5. Non bike activities – there is a lot of opportunity for snorkelling, diving and hiking as well as incredible WWII sites for history buffs.

At the conclusion of last year’s race it did not seem there would be another edition.  However with the support of the Tourism board, sponsors and some really motivated individuals the 2013 ran and ran flawlessly.  I think the main reason for that is a woman named Kanae Quinn.  If you want to host an event where everything just happens like it’s supposed to, Kanae is your woman.  As soon as you started to formulate a question in your head like “how do we get to the start line?” there would be an email, or a race pack which explained everything in detail so all you had to do was follow the instructions, sit back and relax.  It really was kind of spooky after a while!  The course marking was spot-on and the traffic controllers actually controlled traffic, which was a nice change.

As for the race it was hot, hilly and tough as usual.  I took out first female, and also third overall so the boys need to lift their game.  The flat 25k section was tackled at the start of the race which made it much more social, riding in a bunch rather than a lonely time trial into a persistent headwind at the end which it had been the last two years.  There were fewer ‘pros’ this year, but more participants, which is what this is ultimately about: encouraging the locals to enjoy their environment on bikes and live healthier lives.

As defending champ I get to go back next year, and I’m hoping to take a few Aussies with me so send me a message if you are interested. 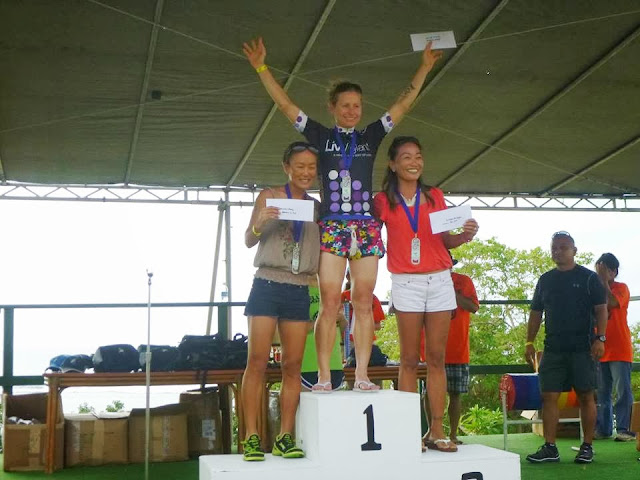